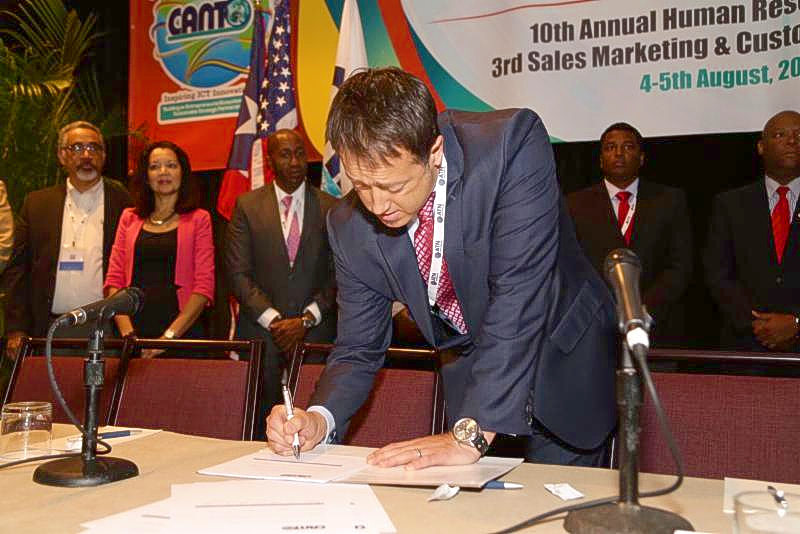 PHILIPSBURG–St. Maarten Telephone Group of Companies TelEm was among a number of telecommunications in the Caribbean signing a Voluntary Code of Practice on Safeguarding the Open Internet.

The signing of the Code was one of the highlights of the 32nd Annual Conference and Trade Exhibition of the Caribbean Association of National Telecommunications Organizations (CANTO), which was held at the Sheraton Puerto Rico Hotel and Casino from July 31 through August 5.

The signing ceremony for the Code of Practice was one of the most notable events among the many discussions, presentations and panels of the event.

“The region continues to grapple with the changing landscape of information and communications technology (ICT), the signing of the Code is important as through CANTO it provides a unified approach which is sometimes needed, as compared to individual approaches,” CANTO Chairman Julian Wilkins said after the signing.

“CANTO will continue to facilitate individual assistance as well as regional approach to ICT issues when and where needed,” Wilkins added.

Joining TelEm in signing the Code were Chief Executive Officers and Country Managers of Digicel St. Kitts and Nevis, St. Vincent and the Grenadines, St. Lucia, British Virgin Islands, and Antigua and Barbuda, along with representatives of GT&T Guyana, Innovative United States Virgin Islands, and Cable and Wireless Communications.

The conference opened with a ministerial round table moderated by Wilkins. Sitting in on the round table were Minister of State and Information Medford Nicholas from Antigua and Barbuda, Minister of Communications Catherine Hughes of Guyana, and Minister of Telecommunications and Public Administration Maxie Cuffie of Trinidad and Tobago.

The Ministers spoke openly about specific issues affecting their respective territories as well as issues requiring a regional approach. They in varying ways recognized the need for more dialogue among stakeholders in the region and the need for mechanisms to improve regional collaboration in telecoms.