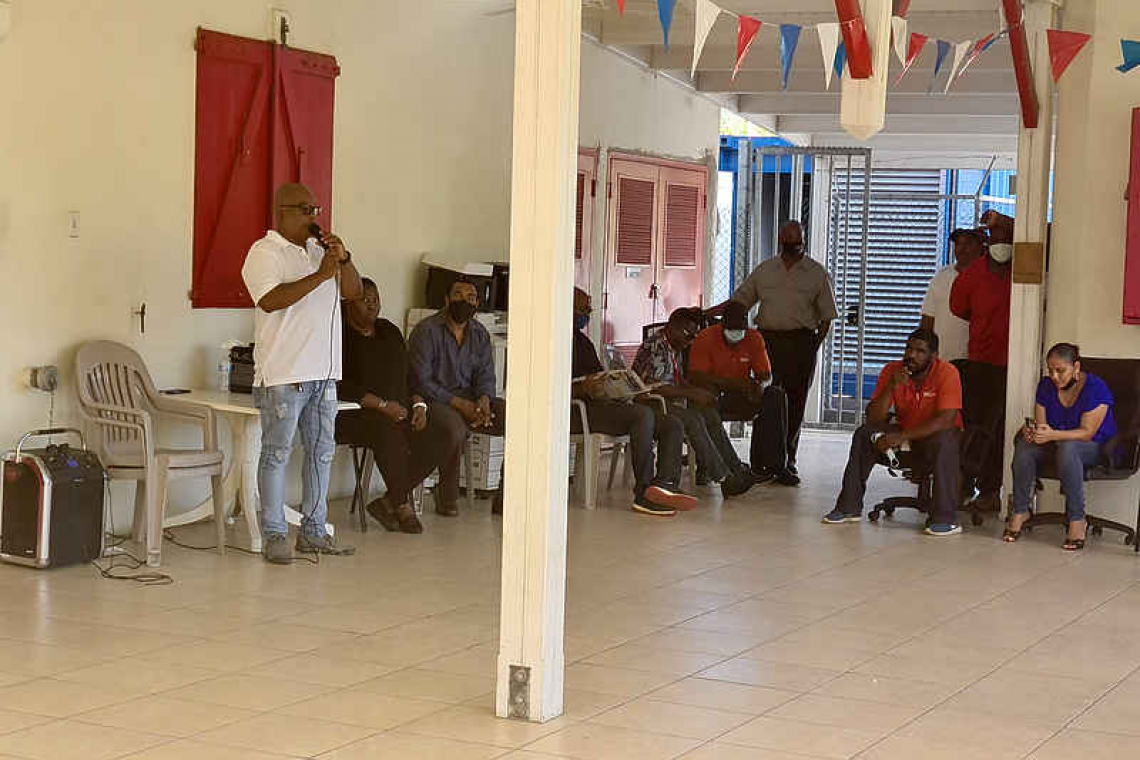 Board members of the SMCU address its members outside of TelEm on Tuesday.

PHILIPSBURG–Telem employees backed by their union the St. Maarten Communications Union (SMCU) are calling for management of the company to reverse all the changes made to their November 2021 salary which retract merit increases and merit max bonuses.

TelEm Group employees gathered outside of the main building in Philipsburg on Tuesday. The union made it clear to The Daily Herald however, that workers are not on strike, all persons wants to work, but are first waiting on management’s response on their request to reverse measures implemented.

The offices were closed to the public on Tuesday by management.

Treasurer of the union Nataly Frans explained to the newspaper that employees noticed several changes made to their salary on Monday without their prior consent. The union promptly called a meeting with its members that afternoon and spoke with management of TelEm Group and laid out their discrepancies.

On Friday, November 19 management sent out a letter to all employees informing them that merit increases and merit max bonuses paid during 2021 will be reversed. The company explained that those employees who received salary increases and others who have reached their max salary in January will have their merit max bonus reversed. This went into effect on Monday, November 22. The company cited that this was done in order to be compliant with the National Ordinance on cutting benefits in the public sector following a related judgment rendered by the Constitutional Court.

TelEm Group noted the impact this change will have on the employees for their November salaries and therefore opted to compensate personnel by granting them a loan for the same amount that has to be repaid. This is to be deducted in 12 monthly instalments.

SMCU noted the negative and unforeseen impact this will have on everyone. Frans said employees were not given the option to give their consent to any of these changes prior to their happening.

The union explained their disapproval with the changes to employees’ salaries and the manner in which management went about implementing these changes. They further noted their disagreement with the implemented salary advance and how it was brought forward.

The union said employees should have been provided a fair chance to discuss how they wished to repay this advancement and not be limited to stipulations set by management. SMCU also noted that employees were not given enough opportunity to digest the information relayed to them, agree to its terms, or speak with the union before these changes were implemented.

In a meeting on Friday, management was informed of the union’s request to seek legal advice on these measures. Afterwards, the letter was nevertheless sent out to all employees.

On Tuesday, following the immediate disapproval by employees, management sent out a subsequent letter where they noted the employees’ objections to these measures, especially the repayment agreement. Management noted that they were however, obligated to comply with the National Ordinance and will resort to a different repayment manner.

Management stated that a decision was since taken to set-off what must be repaid to the company against the performance bonus for 2020. Any remaining part of the bonus after the set-off will be paid in December 2021.

TelEm offices in Philipsburg were closed to the public. 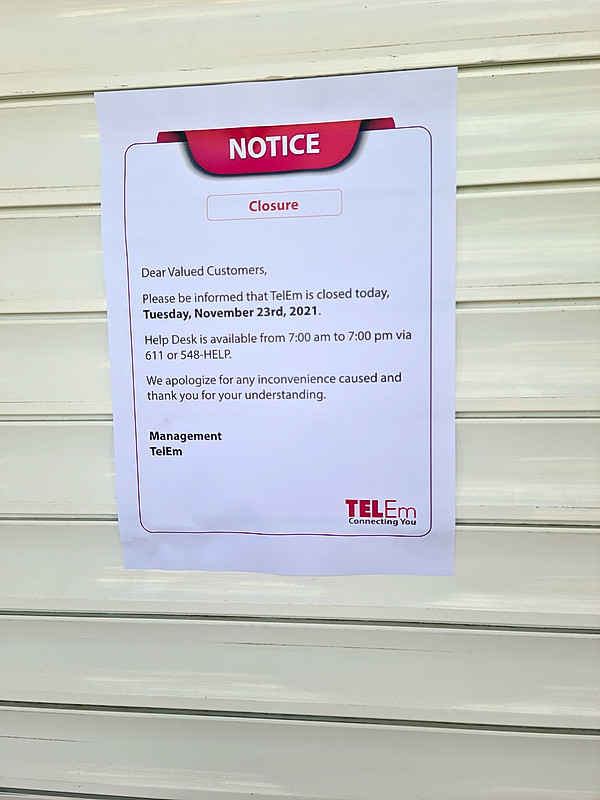 SMCU expressed to the newspaper that employees should not be obligated to repay a bonus, as this is not a salary increase.

The union said it was understood that the Prime Minister was having and will continue to have discussion with the Committee of Civil Servants Unions (CCSU) regarding compliance with the law.

The union said it was stumped as to why TelEm Group is not awaiting the results of these discussions before jumping to implement the measures. They noted that TelEm Group is the only government-owned company thus far that has implemented such.

The union made it clear that, together with their members, they will continue to sit and await management’s decision to finally reverse these measures.

The newspaper understands that the Labour Mediator was contacted and informed by management of the current events.

November 29, 2021
0
WILLEMSTAD/PHILIPSBURG--The Court of First Instance in Curaçao gave a verdict on Monday in the liability case of the Central Bank of Curaçao and St. Maarten CBCS on behalf of ENNIA insurance company against the company’s (ultimate) shareholder and former...
Read more