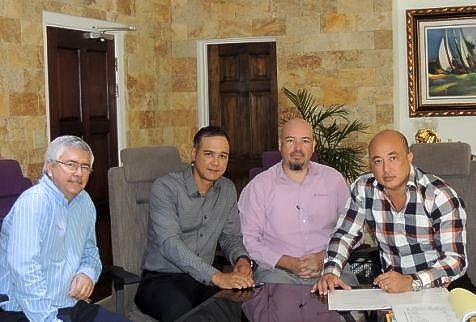 The Minister met with the Supervisory Board of the Port on Friday morning to discuss the immediate future as business at the facility continues. In this regard, she spent the day reaching out to stakeholders, in particular the Florida-Caribbean Cruise Association (FCCA) and its President Michele Paige, to assure the Association and its cruise lines that Port St. Maarten is open for business and ready to provide its usual quality service and operational excellence.

This is in light of the arrest of the Port’s Chief Executive Officer (CEO) Mark Mingo, who was detained by local authorities on Wednesday in connection with the ongoing “Emerald” investigation. The Minister made the decision on Friday, according to a press release from the Cabinet.

Arrindell-Doncher, who is responsible for Port affairs, explained that Van Kooten and Van der Mark will form a managing board for the company for as long as Mingo is not able to fulfil his function as CEO of the company. The appointments were made in accordance with the company’s articles of incorporation.

The Minister stressed that everyone deserves a fair trial under the law and that Mingo is innocent until proven otherwise. Mingo’s attorney has issued a press release stating that his client denies any wrongdoing and faces the future with complete confidence.

According to Port officials, the Justice authorities explicitly stated that the Port is not a suspect in any ongoing investigation, according to the press statement.

Mingo appeared in front of a judge on Friday morning. His detention was considered lawful and was extended for eight days.

The Emerald investigation was launched in April 2016. It started when Checkmate Security owner O’Neal Arrindell was suspected of forgery, money laundering and tax evasion. The offices of Port St. Maarten and the offices of Checkmate were searched in November 2016. The offices were again searched on Thursday, June 9.

Member of Parliament Chanel Brownbill was arrested in connection with this case on March 15, 2017. He and two others continue to be suspects in the Emerald investigation. Although they were released at a later date, the case continues and the Prosecutor’s Office does not exclude more arrests.