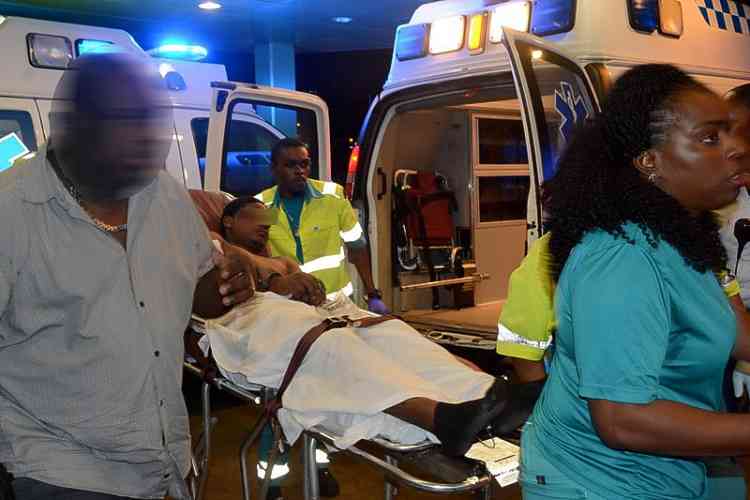 PHILIPSBURG–Five young suspects ranging in age from eighteen to 21 years stood trial December 20, 2017, on armed robbery charges. On Wednesday, all defendants heard the Judge declare them guilty, with the three main defendants being sentenced to nine- and ten-year prison terms.

Late last year, the Prosecutor called for 12- and 10-year prison sentences for the three main suspects in this case.
Main suspects Delangio R. Webster (21) and Ashmore D. Hodge (18) heard the Prosecutor demand 12-year prison sentences during the full-day Court hearing.
Hodge was not yet 18 when he committed the alleged crimes, but the Prosecutor said he had committed six crimes in four months, proving he already was a “hardened” criminal.
Webster and Hodge were both found guilty of involvement in an armed robbery committed at a home on Agate Road in Pelican on December 7, 2016. The victim was tied up, beaten and threatened with a firearm during the robbery. Several items were stolen, among which were the victim’s car, bank cards and credit cards.
The two were also charged with deprivation of the victim’s liberty and with being an accomplice to the theft of money from the victim’s bank account with use of the stolen cards.
Both were also suspects in the armed robbery of Yan Yang supermarket in Sucker Garden on January 23, 2017, during which US $600 and two cell phones were stolen.
One day later, Wah Yung supermarket in Cole Bay was robbed of $100 from the cash register, while a customer’s gold watch, chain and ring, and a wallet containing 800 euros, $500 and credit cards were taken. However, the Court did not find these robberies proven for lack of evidence.
Webster and Hodge were both arrested January 27, 2017, during an armed robbery at Fai Wang Chinese restaurant in Cole Bay, during which three suspects were caught red-handed after a shootout with the police.
The Judge found both men guilty of this robbery and said it was “regrettable” that there still was no police report about the shooting, but that this did not lead to milder punishments.
Webster and Hodge were both sentenced to nine years. They will also have to pay $13,000 in damages to the victim in the Pelican robbery, as will their three co-defendants.
The Court followed the Prosecutor’s 10-year demand against Brian Boodram (20) for his role in the Pelican and Fai Wang robberies. He was also found guilty of having taken part in the violent armed robbery of two Dutch tourists on Kim Sha Beach on January 22, 2017.
The Court also found it proven that Boodram had mistreated a person in an attempted robbery at Boardwalk Boulevard on March 4, 2017. Possession of a brass knuckle was also considered proven.
Janry St. Ville (20) and Andrew A. Gordon (17) played minor roles in the alleged crimes. St. Ville was found guilty of complicity in the supermarket and restaurant robberies as the driver of the getaway car.
The Judge considered it proven that he knew about the robberies, but possession of an illegal firearm was not found proven. For these crimes, he was sentenced to 24 months. The Prosecutor had called for three years.
The Court sentenced the youngest defendant, who was 16 when the crimes were committed, to a conditional sentence of 18 months’ youth detention, on two years’ probation, with 200 hours of community service.
The Prosecutor had demanded 18 months youth detention, six months of which were to be suspended, on two years’ probation.
The Court imposed a lesser sentence in granting the young defendant a second chance. He had been on the verge of becoming a criminal, but had made a change in his life. He works and had obtained a diploma, the Judge stated.
The Court found it proven that he had played a lesser role in the Pelican robbery and had not taken part in the deprivation of the victim’s liberty. It was also not found proven that he had been in possession of a firearm.
His co-defendants, by contrast, were all convicted of possession of firearms between December 7, 2016, and January 22, 2017.
The Prosecutor said during the trial that the victim in the 30- to 45-minute violent armed robbery in Pelican should be awarded damages to the tune of $21,623, as well as $3,000 in immaterial damages. The Prosecutor’s Office also demanded a dispossession claim of $2,334 for all suspects, but the Court rejected this claim.