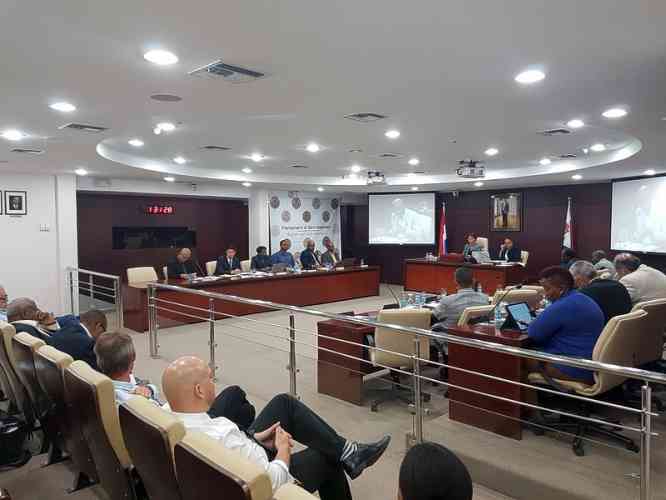 PHILIPSBURG–The discussion about the country’s smoking mountain of garbage made it to the floor of Parliament on Wednesday. However, the debate, suspended until Friday afternoon, was primarily about pinpointing a long-term solution and very little about solutions now.

The need to properly and fully cover the garbage at the two dumpsites was highlighted, in particular pointed out by Member of Parliament (MP) Rodolphe Samuel (National Alliance (NA)) and agreed to by Health Minister Emil Lee.

However, Lee pointed out that the flawed management contract, awarded under the former NA-led Government, stands at the root of the garbage fires. That contract was renewed in December 2017 for another year without any attention paid to its flaws.

One glaring flaw is a fixed provision of soil/dirt to cover the garbage. The contract calls for the company to supply 400 cubic metres of dirt weekly. This means when garbage exceeds that amount it remains uncovered letting oxygen settle in crevices – a main ingredient in fires.

The “Hurricane Irma” dumpsite caught on fire over the weekend. The roaring inferno blanketed Philipsburg and its environs with potentially toxic smoke. The garbage mountain, the country’s principle dumpsite some distance away, caught fire afterward. The combination of flames and thick, black smoke has forced the shutdown of the Government Administration Building, schools and other facilities since Monday.
The flawed contract is “a direct contributor” to the constant fires on the principle dumpsite and now on the Irma one, said Lee.

Aside from insufficient dirt to cover garbage, security measures mandated by the contract were never taken. Lee said the contract calls for security 24 hours a day, seven days a week. This is sorely lacking, as are the minimum eight security cameras that should monitor the principle dumpsite. Security and proper monitoring would have served to apprehend the culprits in what have been termed arson-related fires.
“The country is looking at another year of this behaviour,” said Lee. He said nothing could have been done by the current Government to quash the contract. It was inked in “a quick and efficient manner.”

Government’s Accountants Bureau SOAB has compiled an audit report of the management of the dumpsite. That report highlighting the many shortcomings of the dumpsite management contract was available to the former Government prior to the renewal of the contract in December. The report is expected to be in the hands of MPs ahead of the resumption of the meeting on Friday.

Environment VROMI Minister Miklos Giterson called the dump a “toxic monster.” He said any long-term solution must be approached in a “transparent manner” and must have input from all related parties. The solution must “be found in the clear light of day for all to see” and be “embraced by majority” of stakeholders, he said.

Much attention was also placed by several MPs on the memorandum of understanding (MOU) signed by the former Government with a Canadian company called Enviro Green. MP Theo Heyliger (United People’s (UP) party) called on the recently-appointed Environment Minister to share the documentation related to the MOU. He expressed concern about Government standing as guarantor for some NAf. 70 million for the connected waste-to-energy plant.
The legal implications of the MOU were queried by MP Sarah Wescot-Williams (Democratic Party (DP)).

MP Frans Richardson (United St. Maarten Party) claimed the “constant instability of Government has effectively stalled any progress at the landfill.” Every time Government changes, he said, “the reset button is hit” on the project.
MP Perry Geerlings (DP) called on civil servants or anyone else who may be privy to any inconsistencies with the way the dump contract or any other was handled to come forward and not be fearful.

Fix things internally was the call of MP Tamara Leonard. The one constant in VROMI is its civil servants; she singled out the head of maintenance saying there appeared to be a “dark cloud” over everything he does.

MP Ardwell Irion (NA) queried whether the solutions to tackle the garbage crisis, both short- and long-term, had been communicated to the World Bank, the entity regulating the Dutch hurricane recovery aid and overseeing projects to be funded by this avenue. He also called on people to choose recycling, saying that his household has started and has been taking their recyclable waste to the bins across the border on the French side.

MPs Claret Connor (UP), George Pantophlet and Hyacinth Richardson (NA) were keen on getting to solid solutions to the garbage situation. They, like other MPs, recalled past attempts and the history of the ballooning crisis.