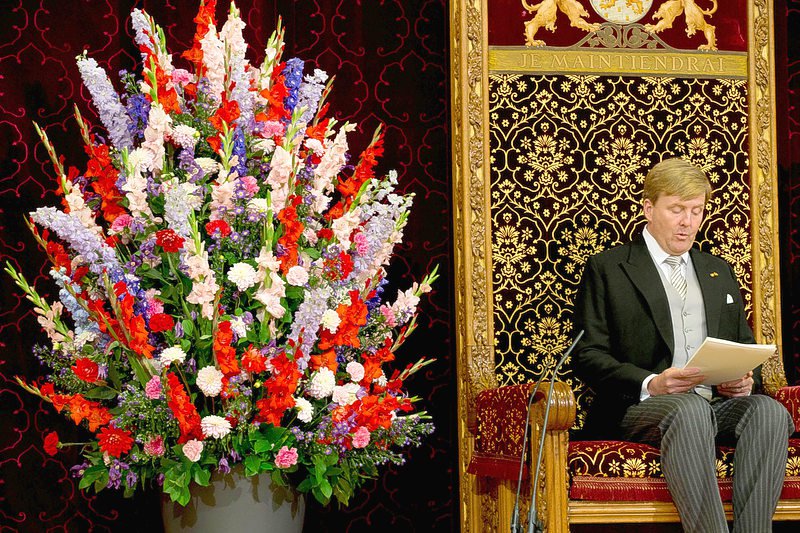 An additional amount of 1.7 million euros has been allocated for the Dutch Caribbean Coast Guard.
The Dutch Caribbean was barely mentioned in the Speech from the Throne, read by King Willem-Alexander and written by the Dutch Government, during Budget Day (“Prinsjesdag”) in The Hague on Tuesday.
The only mention of the islands was in relation to the close cooperation with the Dutch Government to secure temporary membership of the Netherlands in the United Nations Security Council. In past Throne Speeches, there was more attention for the Dutch Caribbean. The Throne Speech traditionally marks the start of the new Parliamentary year.
The Kingdom Relations budget, which was presented on Tuesday, shows 291.8 million euros in expenditures, 104.8 million euros in obligations and 36.4 million in revenues. The biggest chunk of the expenditures, 186.9 million euros, is reserved for the long-term obligations in connection with the financing of loans for the Countries Curaçao and St. Maarten.
The amount reserved to finance loans for the two Dutch Caribbean countries this year is higher than the 149.9 million euros of last year. In 2017, Curaçao and St. Maarten will pay 28.4 million euros in paybacks and interest.
On the budget, 70.8 million euros has been allocated to cover the costs that resort under the so-called guarantee function of the Kingdom; that entire amount is reserved for expenditures related to law enforcement and good governance including detectives capacity (21.8 million euros), border security by the Royal Dutch Marechaussee (6.1 million euros), the Dutch Caribbean Coast Guard (39.5 million euros) and the Judiciary (3.3 million euros).
“The law enforcement in the Dutch Caribbean countries will be further strengthened in 2017. In 2016, the extra effort was started to tackle organised (undermining) crime, especially in St. Maarten. In 2017, the focus is on achieving concrete results,” stated Acting Minister of Home Affairs and Kingdom Relations Stef Blok who replaced Minister Ronald Plasterk until last Friday, due to a heart operation.
“A stronger law enforcement is possible because of the temporary expansion of the Detectives Cooperation Team RST, the Public Prosecutor’s Office and the Joint Court of Justice, particularly aimed at the combating of border-crossing and undermining crime, high impact crimes and human traffic and –smuggling,” stated Blok.
Priorities in 2017 remain the tackling of money laundering, human trafficking, weapons smuggling, international drug trade and criminal organisations. “The approach in dealing with the integrity issue in St. Maarten is undoubtedly tied to the needed strengthening of the law enforcement sector. That is why agreements were made regarding the assistance for and the strengthening of law enforcement in St. Maarten.”
The Ministry of BZK has reserved more money to cover the adverse effects of unfavourable exchange rates of the euro and the US Dollar. Contributions of the Dutch Government, originally set in euros, have been negatively impacted in the past few years when the amounts were paid out in US Dollars.
Especially the Coast Guard was hampered by the problem of the exchange rate. The Second Chamber of the Dutch Parliament demanded a structural solution. In the 2017 Kingdom Relations budget it was stated that the exchange rate issue would be covered from the budget item “unforeseen.” Minister Blok announced that 12 new fast vessels of the type Metal Shark Defiants 38 will be put into use early 2017. These boats will replace the Super RHiBS.
The precarious finances of Aruba, St. Maarten and St. Eustatius were mentioned in the Kingdom Relations budget. “The financial situation in Aruba and St. Maarten remains vulnerable and will also require the input of the governments of both countries in 2017 and beyond to get and keep the finances in order in a sustainable manner.”
“Of great concern is the financial situation in St. Eustatius,” stated Blok who explained that supervision was imposed since 2015. The Kingdom Government Representative (“Rijksvertegenwoordiger”) has drafted a Plan of Approach, in cooperation with the Island Government, the Committee for Financial Supervision CFT and the responsible accountant.
This plan aims at improving the financial and administrative functioning of the Island Government. Preliminary supervision was imposed on Statia’s expenditures in 2016 to guard against overspending of the budget. The Kingdom Government Representative, in cooperation with the local government, will continue to execute the Plan of Approach in 2017. There will be extra attention for the improving of the quality and organisation of the governmental apparatus.
The 2017 Kingdom Relations budget has 14.6 million euros allocated for projects to improve the islands’ social and economic development and the government finances/administration. This includes the funding of regular projects such as the Kingdom Games and the Kingdom Conference. The amount is divided among Aruba, Curaçao and St. Maarten (6.7 million euros) and the public entities Bonaire, St. Eustatius and Saba (7.8 million euros).