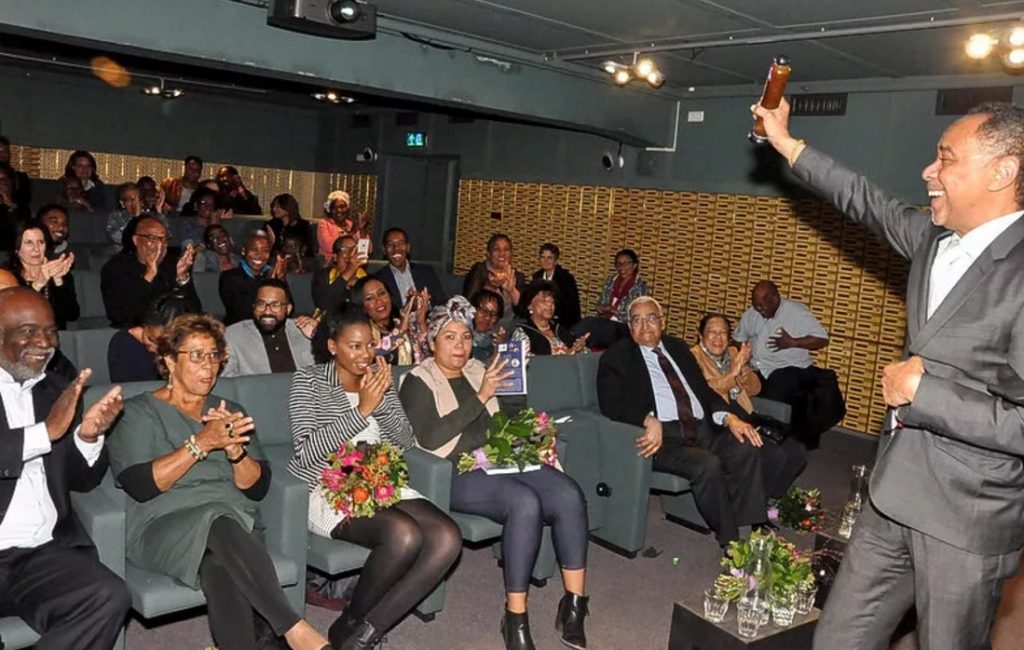 THE HAGUE–The pain of the Dutch Caribbean man, finding his position in society, his relation with women and his family, and dealing with his emotions. Interesting and not often discussed topics that keynote speaker psychiatrist Glenn Helberg dared to bring up at a recent lecture of the Antillean Network Association VAN.

Helberg, a psychiatrist by profession and Chairman of the organisation for Dutch Caribbean persons in the Netherlands Ocan, expressed his concerns about the “deeply rooted pain” that he still noted in many Curaçao men and the consequences for the way society relates to himself, his wife and women in general, his family, the upbringing of his children. The audience at the VAN lecture, part of the Black Achievement Month, understood the issue very well.

What is your image about strong black men and strong black women, Helberg asked the audience. “Very likely you will associate the Dutch Caribbean woman with agility, her mental strength, her sense of responsibility, her caring for her children and her hard work. And the man? Muscle strength, sports and sexual potency? You will probably associate the man with a lack of responsibility, not generating sufficient income and being untrustworthy,” said Helberg.

These images have become part of people and have become stereotypes that have evolved in the course of history about the black man and black woman. “The black man and woman being judged based on group characterisation,” said Helberg, who added that this stereotyping didn’t count for white people. “The white person is and may be present in all its behavioural variations without this affecting the entire group.”

The position of the Dutch Caribbean man in society, his self-reflection and his relation with women and his family, and the associated stereotyping has a lot to do with the times of slavery, the time when the wife and children of a male slave became the possession of the white plantation owner. The traditional African family relations were destroyed.

“Slavery, colonialism has hit the black man in his relation of self-control and the most serious thing is that the man has lost his wife and the control over his children, in fact his legacy. Until today, the man is seen as untrustworthy and not in the least by his wife. The woman will speak of her child (not our child),” said Helberg.

“The colonial system successfully managed to allow a black woman to see her husband as: good in bed, not taking responsibility and unable to get somewhere in life.” Helberg concluded that aside from the general need of decolonisation, there was also a need to decolonise the images that a woman has about a man, and the man of himself.

According to Helberg, colonialism has affected the black man in such a way that he minimises himself. If he can’t win, then social suicide. His wife averts him, he cannot be a father to his children, and he does what is expected of him: disappear, not playing a role, alcoholism, crime, unemployment, not being able to share power, playing boss.

Society needs to get in the process of becoming conscious of this issue and work on it. Men need to acknowledge their emotions and do something with them. “When a freezing of emotions takes place, we need to get worried. For emotions are movements in the interaction of our human principle. When you are frozen in your mind, you are also frozen in your movements in society.”

Helberg proposed a sort of healing ritual whereby all parts of society would participate in a truth counsel to tell about their respective roles in history. Also, the policy area emancipation or decolonisation could be added to the Ministry of Education. “Perhaps we could really research how we can empower ourselves as society.”

A debate followed after Helberg’s keynote speech. The panel members said that they very much recognised the dilemma described by Helberg. Initiative taker of the successful Man for Man (“Homber pa Homber”) programme said it was common to name negative characteristics of men. “A mother who was asked to name positive characteristics of her son, said after pondering for a while that her son had many women.”

Kenneth Valpoort who works with Dutch Caribbean youngsters in the Netherlands said that he saw the struggle of young people on a daily basis. He said that things were changing for the better. “The current generation isn’t walking away from the responsibilities like before. Young men are walking behind the baby stroller.”

Writer/poet Igma van Putte-de Windt said that Caribbean women should also be self-critical. “Our men are the result of the upbringing by mothers. Our sons are considered little princes. We should start looking at our own role more critically.”

Former Antillean House staff member Ronny Martina said that nothing would ever change if the slavery past was not formally acknowledged and “concealed with fallacy” with the excuse that slavery happened long ago.

St. Maarten law student Kyara Walker asked the critical question Who Am I? “The young black man is lost. He doesn’t truly know himself. Most men cannot define themselves because they first need to address the pain of slavery, that part of our history. She said it was important to discover your own strength.

VAN President Roos Leerdam-Bulo had a surprise announcement at the end of the inspiring evening: the winner of the first Achievement Award. This award, an artwork of glass by artist Melvin Anderson, went to Glenn Helberg who has done a tremendous amount of work for the Dutch Caribbean community, all on a voluntary basis.