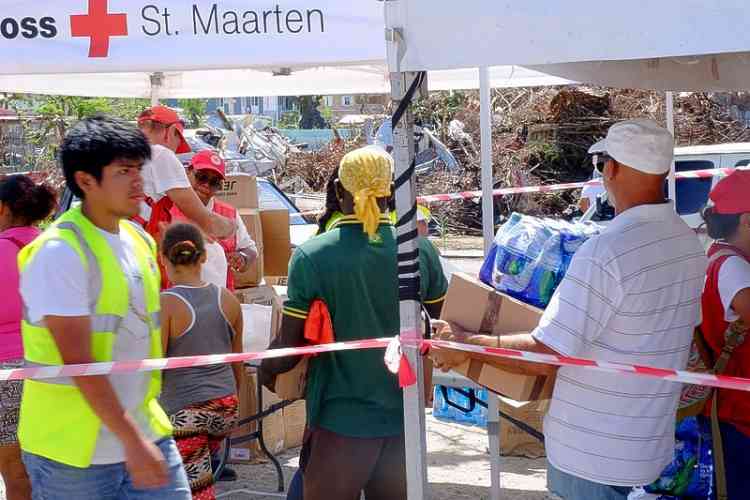 PHILIPSBURG—The Red Cross distributed relief supplies to more than 26,700 hurricane survivors in St. Maarten in the first three months after devastating Hurricane Irma, according to a press release from the organisation on Wednesday,

The heavily damaged island still needs support as families rebuild their lives. The focus of the Red Cross relief effort is now shifting towards helping the vulnerable towards reconstruction. Many families in St. Maarten remain in a desperate situation after Hurricane Irma wrought havoc across the island on September 6.

In the immediate aftermath of the storm, people were in immediate need of basic items such as clean drinking-water, food and tarpaulins. Up until early November, the Red Cross focussed its efforts on distributing these emergency supplies, providing 117,000 litres of clean drinking water, 27,000 jerrycans, 8,000 food packages, almost 12,000 tarpaulins, 140 shelter kits, and 1,300 hygiene kits.

The population needed more than just relief supplies. The severe hurricane paralysed the island’s communications network. Many people were in a state of panic, as family members could not contact each other and many of them were asking themselves, “Are my loved ones still alive?” A total of 481 people from 30 countries were reported as missing.

Specialists from the Red Cross based in The Hague and in St. Maarten worked to identify those who were missing and many families were reunited. There are currently 15 requests for people to get in touch again that are unresolved.

Slowly but surely, daily life is returning to normal in St. Maarten. However, damage from the hurricane remains evident and the tourism industry – the island’s major source of income – has not yet rebounded. Aid is still needed urgently. The Red Cross is currently working with Dutch festival organiser Open House to provide breakfasts and hot lunches on schooldays to approximately 4,000 children at 18 state primary schools.

More than 21,000 vulnerable people, such as the elderly and people with an impairment, are receiving Red Cross food vouchers that allow them to purchase groceries in certain supermarkets. This month, the Red Cross is also launching its shelter repair programme which will provide technical expertise and materials to those most vulnerable whose homes are damaged, yet repairable.

The Red Cross will advise people on the best way to rebuild their homes so that they are better able to withstand severe weather conditions in the future. This approach allows homeowners to choose for themselves which materials they need the most and provides a boost to the local economy.

This relief effort by the Red Cross is made possible by donations. The association of Dutch municipalities VNG has mobilised its municipalities to donate and the Association of Funds for the Caribbean region of the Kingdom of the Netherlands has also made a significant contribution to Red Cross activities.

A quarter of the 17.8 million euros for aid that has been donated has already been utilised in providing aid or has been committed to ongoing projects.