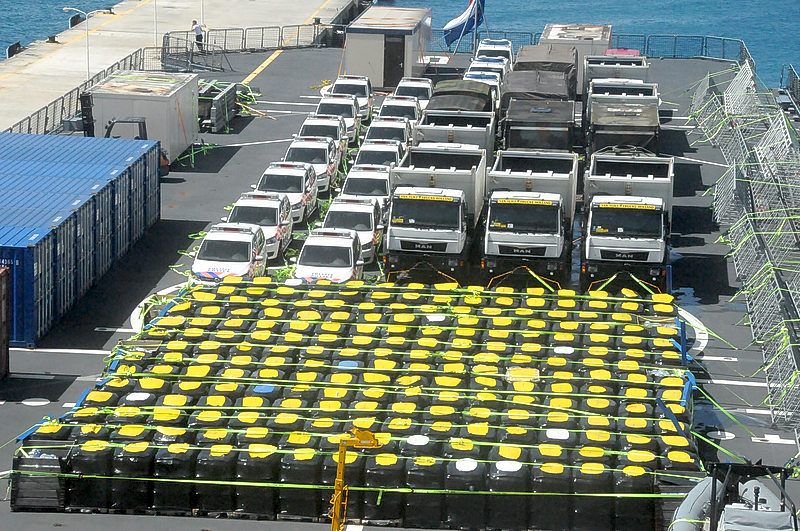 PHILIPSBURG–The largest ship of the Netherlands Navy, transport ship His Majesty Karel Doorman, arrived at Port St. Maarten on Sunday morning with promised essential goods from the Netherlands. The ship left the Netherlands two weeks ago with aid after the devastation of Hurricane Irma swept the island earlier in September.

Navy spokesman Jan Pullen said on Sunday that the Navy is happy to assist the people of St. Maarten during these trying times and hopes these supplies will help with the rebuilding of the island. The ship with its 160 crew members brought a large load of relief goods, including 10 transmitter antennas for mobile telephones, 18 Dutch police vehicles, two police mobile command units, military trucks, cool containers, 12 dump trucks and eight water tank trucks.
The Karel Doorman also brought much-needed construction material for the rebuilding and repairing of homes, schools and other vital infrastructure. A number of bulldozers and excavators were also loaded on the ship and are now on island.
The ship also carried school supplies, chairs and tables, and three large pavilion tents for 36 classes to the island, as well as containers with food, water and other relief supplies such as toilet paper and several containers with supplies collected by civilian initiatives in the Netherlands. The relief load was coordinated by Ministry of Home Affairs and Kingdom Relations BZK, together with other Dutch Ministries.
The 205-metre-long 30-metre-wide ship will be at St. Maarten for three days before going on her next mission.
For maritime support, the ship has two replenishment-at-sea masts, holding capacity of approximately 8,000m3 of fuel, more than 1,000m3 of helicopter fuel, approximately 450 m3 of potable water and approximately 400 ton of ammunition and other supplies.
The ship has 2,000 lane metres for transport of material such as tracked and wheeled vehicles or containers. She has an elevator and crane for up to 40 tons, a roll-on/roll-off facility for vehicles, and a steel beach stern construction for accommodating cargo transfer via landing craft. The ship is equipped with two landing craft.
For sea-based operations, she has a large helicopter deck with landing spots for operating two Chinooks simultaneously and a hangar with a storage capacity of up to six medium-size helicopters, including NH-90, CH-47F and AH-64D Apache.
The ship can accommodate up to 300 personnel, of whom 159 are the ship’s crew. She also has command rooms for war staffs and a large hospital facility with 20 treatment areas and two surgery rooms. Modular flexibility allows configuration of temporary areas for evacuees or prisoners.
Positioned off shore, the ship is designed to act as a sea-based operations platform supporting (amphibious) land forces with logistic support, supplies and helicopter support (transport and attack).