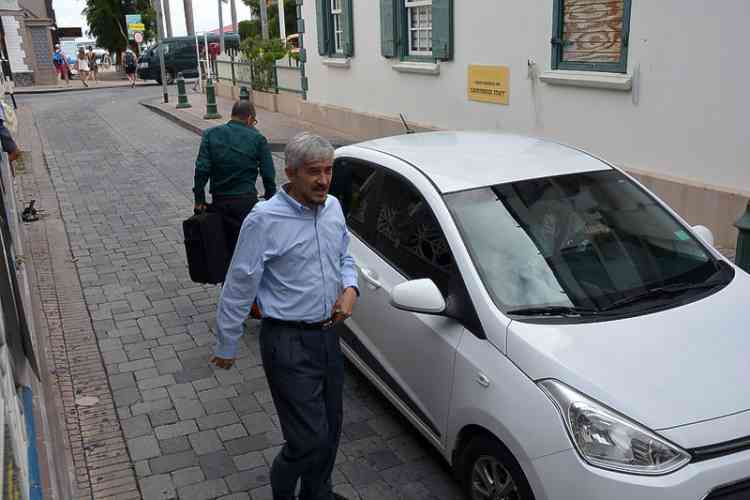 Suspended Member of Parliament Theo Heyliger arriving at the Courthouse on Monday afternoon. Heyliger and three others are the prime suspects in the so-called Larimar investigation.

PHILIPSBURG–Suspended Member of Parliament (MP) Theodore Heyliger and his stepfather G.P., R.E. and former Windward Roads Director J.B. had their first day of proceedings in the so-called Larimar case with a “regie zitting” (preliminary session) in the Court of First Instance on Monday. Heyliger showed up 30 minutes late with his lawyer Eldon “Peppie” Sulvaran, who flew up from Curaçao to attend the hearing.

The “Larimar” investigation involves corruption, money-laundering and payment of bribes to a public official and civil servants in St. Maarten by construction companies to be awarded big projects. Heyliger is accused of receiving in total approximately US $4 million over a period of 15 years while holding public office as a minister, an island council member or as a member of parliament.

The prosecutor started with suspects R.E. and J.B., who was represented by his lawyer via video conference from the Netherlands, and E.F., who was present in the courtroom on Monday. Lawyers for both suspects argued that they are not in possession of the complete case file.

It was agreed that the prosecutor will be handing over relevant files to the defence. The case against the first two suspects will continue in September, according to the judge, who agreed to give the defence more time to gather additional information about the case.

During his separate hearing on Monday afternoon, Heyliger was accused of receiving monetary gifts during the period 2004-2019. The main accusations were divided into four charges.

Under the first charge, over the period of January 1, 2004 to March 31, 2014, the prosecutor told the court that Heyliger had received from Windward Roads B.V. and/or Central Concrete Mix B.V. and/or Dutch consultant R.M. and/or Advanced Consultech S.A. and/or J. Jones some US $1,847,685.24 in cash, money transfers, a credit line and/or waiving of open invoices for Caribbean International Maritime CO. NV and/or Sint Maarten Shipping & Stevedoring NV and/or Nichirei Carib Co. NV to the tune of NAf. 900,000, a Dodge Charger worth nearly $200,000 and repairs done to his private home to the tune of NAf. 135,292.88.

Heyliger is suspected of having used his influence to facilitate the awarding of one or more public works contracts to Windward Roads in return.

The prosecutor read in the second charge that Heyliger had received over the period April 1, 2009, to October 1, 2011, from Devcon TCI Ltd. and/or consultant R.M. and/or Caribbean Advice and Consultancy Ltd. some $700,000. This amount was received in cash ($82,468.37), money transfer ($260,000) and (piece of) a parcel of real estate in Upper Prince’s Quarter referred to as the “Mullen property”. All this to facilitate the awarding of dredging work to Devcon.

The fourth charge has to do with Heyliger allegedly selling the Mullen property. Both R.E.’s and G.P.’s involvement in the Larimar case are related to this fourth charge. Both are suspected of helping facilitate the sale in a less than transparent manner while being aware of its criminal origins.

The first two relate directly to the amounts mentioned under the first charge against Theo Heyliger, including the payment of in total some $1,847,685.24 and the repairs done to Theo’s private home to the tune of NAf. 135,292.88 to be awarded one or more public construction projects.

He is also accused of falsifying numerous invoices over the period June 17, 2013, to December 31, 2015, to pay a number of companies a total of $627,726.76 for fictitious work never carried out on behalf of Windward Roads.

Heyliger’s lawyer Peppie Sulvaran said he found it strange that the main witness in the Larimar case R.M. is getting a “sweet” deal by staying in the Netherlands and not facing criminal court at the same time and place as his clients. Sulvaran requested that R.M. come and face trial in St. Maarten, as he is a major witness as well as a suspect. The judge agreed with Sulvaran and ordered that suspect R.M. be present for the next hearing. When contacted by this newspaper earlier on Monday, the Prosecutor’s Office spokesperson could not yet give a date for R.M.’s trial.

Another small victory for the defence was that Heyliger will no longer have to cough up $250,000 for bail within two weeks. Sulvaran informed that judge that R.M. had not had to post bail and had been released to roam free in the Netherlands while his client had to give up his passport and post a hefty lump of cash as bail. The judge agreed with the lawyer and said a guarantee of funds against the $250,000 is admissible.

The judge approved eight witnesses to be heard by the defence team, including the major witness R.M. who must appear personally in court to answer questions from the defence. The two-hour session was postponed until September 2019.

The prosecutor did fire some questions at Heyliger during the hearing and wanted clarity on his whereabouts outside pre-trial detention as he is currently sick. “How can you be sick but when you came from the hospital, you went to your gas station. What was that about?” he asked.

Heyliger’s attorney responded by informing the prosecutor that nowhere in the release agreement did it state that he had to stay at home. “Theo simply went to the gas station to buy a bottle of water to drink his medication,” stated Sulvaran.

The judge wanted to hear from Heyliger during the session on Monday and the former MP briefly explained his medical history with his kidney stemming back to 2008 when he had his first operation. He informed the judge that now he has a tumour that rapidly grew over the past two months and that it is imperative that he travel abroad as soon as possible.

The prosecutor interjected and, asked if his office has his passport, Heyliger replied, “Yes, your office does, and my life is in your office’s hands.”

The former MP added that he had to be in the hospital on Monday, but his lawyer had requested that he come to the hearing.