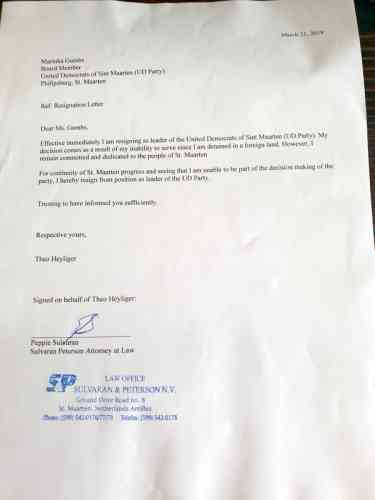 BONAIRE/PHILIPSBURG–United Democrats leader Theo Heyliger has resigned from the helm of the party with immediate effect.

His resignation letter stopped short of saying he was leaving the party. Heyliger stated: “However, I remain committed and dedicated to the people of St. Maarten.”

The resignation letter, dated March 21 and signed by on behalf of Heyliger by his lawyer Eldon “Peppie” Sulvaran, was sent to United Democrats board member Marinka Gumbs.

In the letter, Heyliger states: “My decision comes as a result of my inability to serve since I was detained in a foreign land.”

Heyliger further stated: “For continuity of St. Maarten progress and seeing that I am unable to be part of the decision making of the party, I hereby resign from the position as leader of the UD party.”

Heyliger’s resignation has hit some in the party as a surprise. His wife Grisha Heyliger-Marten told The Daily Herald, “My husband Theo has always put this country ahead of himself. His resignation is his way of making sure this country continues to progress, hopefully unhindered in its growth and progress.”

Heyliger’s resignation leaves the party in the hands of deputy leader Member of Parliament Sarah Wescot-Williams. This can be considered a scenario in which history has repeated itself. Heyliger’s grandfather the late Dr. Claude Wathey was also enwrapped in a legal battle prior to his death. He also relinquished his leadership of the Democratic Party he co-founded to Wescot-Williams in the late 1990s.

Heyliger is suspended from Parliament due to charges of corruption and money-laundering levied by the Prosecutor’s Office in the investigation codenamed “Larimar”. He is currently held in pretrial detention in Bonaire.