Home Headlines & Top Stories Thévenet cautions hoteliers ‘to tell it like it is’ about St. Martin 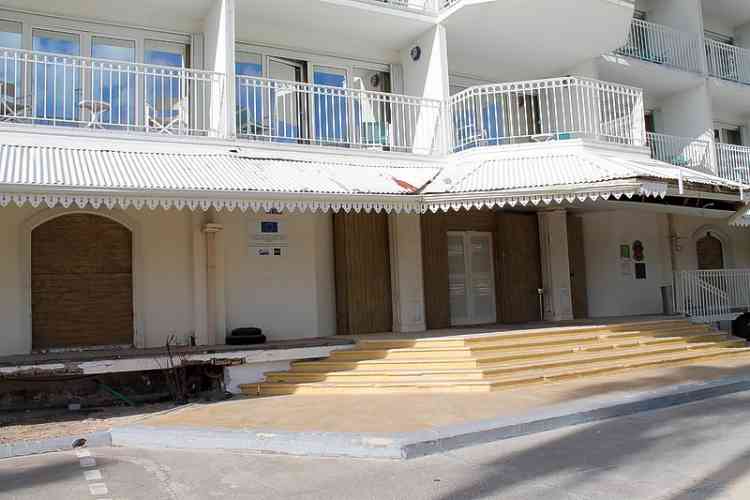 MARIGOT–Secretary-General of the French-side hotelier’s association AHSM Philippe Thévenet says giving an impression to the outside world of St. Martin’s hospitality sector being open for business is premature and risks creating unnecessarily negative reactions, something the island doesn’t need.

“I can understand people want to restart their business to have money coming in, but don’t say to the market we are open when we are clearly not ready,” he said. “Say the truth. Yes, we have restaurants to drink and eat but accommodation is still very limited.
“If I am true to myself I cannot recommend tourists to come here yet until the French side is completely cleaned up. What can they do except drive around and look at damage? Orient Beach has no facilities, there are no palm trees, and Princess Juliana Airport is still in a terrible state. It makes me very sad to see all this.”
Thévenet was commenting on the hotel sector’s recovery three months after Hurricane Irma and how reconstruction is progressing. Clearly there is very little progress as observed on a drive around the French side and this is most likely due to properties waiting for insurance pay-outs.
One optimistic sign came from Le Mercure Hotel in Baie Nettle which announced it is officially reopening on January 7, 2018. A spokesman for the hotel indicated it has 100 rooms out of 200 available. There are no tourists in the hotel yet and rooms are currently being used by Gendarmes, construction people, and relief agency personnel.
“We have reconstruction going on all the time and we continue to get rooms ready for occupation,” the spokesman added. “Some rooms cannot be used yet because they have no roof. But the Spa is open, the pool is open, and the restaurant is serving a limited menu for now. There is some repair work to be done to the restaurant.”
Le Mercure aside, the major large hotels of the French side are out of action until the 2018/19 season at the earliest.
Belmond La Samanna is currently closed. General Manager Michael Schoonewagen during a phone call from Cannes said: “We are hoping to reopen in late 2018 but currently waiting on insurance. I will know more in February or March. Up to now we have just been cleaning up, but we will start renovation soon.”
Owner/Managing director of the devastated Le Beach Hotel, Patrice Seguin, disclosed he is working on a new project for the hotel with a goal of opening in 2019.
“For a new hotel we have had to take a different approach, especially about the ground floor,” said Seguin. “Our plan is to have a panoramic restaurant and convention centre on the top floor. The hotel structure is still in good condition and well built. We are applying for authorisation for a fourth floor for the restaurant. The architectural study will ensure that it is secure. We need six months for the financial study and one and a half years for the renovation. It’s going to be a magnificent project, improving the hotel’s standing.”
Seguin added 20 Gendarmes are staying in the hotel now but in the first quarter of 2018 he expects to open 80 to 100 rooms for construction teams.
No outlook could be obtained from the Riu Palace, Anse Marcel, and efforts to get a situation report from the corporate office have been unsuccessful. Grand Case Beach Hotel suffered extensive damage, but reconstruction work is ongoing, and the property reportedly anticipates having rooms ready for the 2018/19 season. No information could be obtained about L’Esplanade in Grand Case. Captain Oliver’s Hotel in Oyster Pond has reported severe damage and is awaiting estimates for repairs.
If the big hotels are out, there are still accommodations available in very small properties and guesthouses that have escaped major damage. The 30-room Centr’ Hotel on Rue Générale de Gaulle, Marigot, was not too badly damaged. A spokesperson for the hotel indicated it had 20 rooms in good condition. With no tourists the rooms are occupied by mostly travelling business persons.
Over in Orient Bay, small hotels Palm Court, La Playa, L’Hoste, Blue Bay, in Orient Bay Village were all closed, giving the area a distinctly deserted feel. There was no one around from any of the properties to ask what their plans were.
But it was a different story at La Plantation Hotel which looked to be in the best condition of all hotels. The pool bar and restaurant was enjoying some brisk business. Villas around the property looked undamaged from the outside and the grounds in good order. The 75 rooms are mostly occupied by Gendarmes. An employee indicated repairs to rooms are due to start at the end of December.
Esmeralda Resort on the opposite of the road is also entirely occupied by Gendarmes. The property has a neglected feel about it with grass growing high in between the self-catering villas. The reception was closed at the time of the visit.
“There are no facilities here, no service, no towels,” an off-duty Gendarme, sitting by his pool, said.
Back in Orient Bay village, the shops that line the avenue leading to the beach were closed except for one café, a small convenience store and a makeshift bar. But there were no people about.
“We are just waiting and waiting to see how everything is going to turn out, waiting for the tourists to come back,” one shopkeeper said.