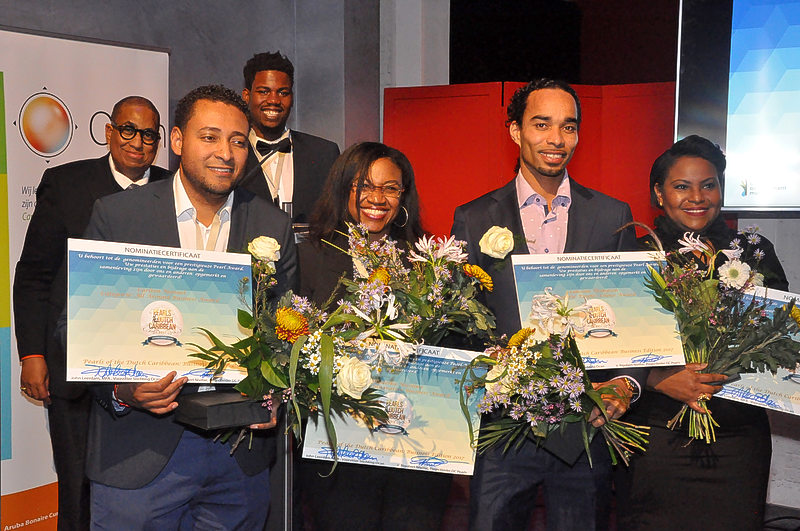 THE HAGUE–Lancelot Thompson from St. Maarten won the People’s Choice Business Award of the Dutch Caribbean Pearls. The fitness instructor and entrepreneur received his award during a ceremony at Diligentia Theatre in The Hague on Saturday, organised by Consultative Body for Dutch Caribbean persons in the Netherlands Foundation OCAN.

There were two other persons who were nominated for the popular award besides Thompson, Giovanca Hooi and Kenty Lichtenberg, but it was Thompson who by far received the most votes from the public. The 32-year-old Thompson was highly surprised when he was called forward as the winner by OCAN Chairman John Leerdam.
“Friends of mine had put forward my name, and all of a sudden I received messages from people who told me that they had voted for me. That I won this award makes me feel very proud and humble,” said Thompson, who about a year ago started his own company LT Fit Force in Hilversum, giving people personal training at home and at public open air sports parks.
Thompson, who grew up in St. Maarten together with his brother Rueben, studied sports management and business at Hogeschool van Amsterdam and fitness health and management at sports academy CIOS, followed by a personal trainer course. “This is my passion,” he told The Daily Herald. “Staying fit, exercising is vital for the body and mind. I always tell people about the importance of sports and exercise, and the positive impact that it has on one’s health.”
One other person from the Windward Islands played a prominent role at the Dutch Caribbean Pearls awards ceremony. Ramie Richardson from St. Eustatius was a jury member for the category All-Round Business Award. “It was an honour to be in the jury. It was no easy task to make a decision,” said Richardson after which he announced the winner as entrepreneur, TV producer and radio and TV host Carlton Manuel from Curaçao.
Shadeska Nicolina, who inspires others to excel through workshops, webinars and as a speaker, won the Innovative Business Award. “This gives me the energy to keep helping others in developing their talents,” said Nicolina from Curaçao. The Social Responsible Business Award went to Charis Kuwas, who empowers women through the community that she started. “The love and power of these women is incredible,” said Kuwas from Curaçao.
The awards serve as a recognition of the Dutch Caribbean talent in the Netherlands, to give a boost to people who are making a positive contribution to society, said MC Gilberto Morisaw, who hails from Curaçao, but with family in St. Maarten. “Together as a Dutch Caribbean community we are doing good things and that is why we are giving recognition to our talents.”
Saturday’s well-attended event started with a one-minute silence for the victims of Hurricane Irma in the Windward Islands. “Our thoughts go out to the people who were hit so hard by this devastating hurricane. We all have links with the islands, and we publically thank all those persons and organisations who have helped the people and the animals, and who have collected relief goods and made donations,” said OCAN Chairman Leerdam.
Curaçao Minister Plenipotentiary Anthony Begina said he was proud of the work OCAN has done. He called on everyone to be an ambassador for their island and country. “Because even though we are from the islands, we have our pride, our talents and we also count in the Dutch society,” said Begina.
Curaçao Minister of Education, Science, Culture and Sports Marilyn Alcala-Wallé made a special stop-over in the Netherlands to attend the award ceremony on her way to Paris for the conference of the United Nations Educational, Scientific and Cultural Organisations UNESCO. She paid tribute to all award nominees who she said all deserved credit for their talent and valuable contribution.
Being an entrepreneur is no easy job, said Alcala-Wallé. “You have to give up a lot to do something good for your fellow human beings. You will be truly successful if you are an entrepreneur who keeps in mind that you do it for other people,” she said. She called Leerdam and the previous OCAN Chairman Glenn Helberg to the stage to give them the much-deserved recognition for their valuable contribution to the Dutch Caribbean community.
A special OCAN project was announced during the event at Diligentia Theatre: the publication of a series of articles in the Amigoe and The Daily Herald newspapers to give positive attention to Dutch Caribbean role models living in the Netherlands. The weekly series titled “In the Spotlight” will commence in both newspapers in January 2018.
As a special guest for this series of articles, OCAN Board Member Jessica Molina called forward the 13-year-old Olympic wrestling champion Junior Mac Donald, whose family hails from Curaçao. Mac Donald has already won many medals, including several gold ones, at national and international wrestling championships. Training six days a week, his dream is to go to the Youth Olympics.

The Council of Ministers extends condolences to family and supporters of...