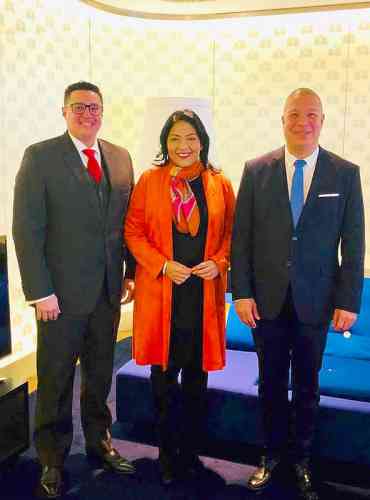 Aruba Minister Plenipotentiary Guillfred Besaril (left) was at hand to welcome Ministers Xiomara Ruiz-Maduro of Finance and Andin Bikker of Justice (right) on their arrival in the Netherlands on Tuesday. Photo courtesy of the Aruba House.

THE HAGUE–Three of Aruba’s Ministers are in the Netherlands for meetings in The Hague. Finance Minister Xiomara Ruiz-Maduro and Justice Minister Andin Bikker arrived on Tuesday. Minister of Social Affairs and Labour Glenbert Croes had arrived earlier.

Aruba Minister Plenipotentiary Guillfred Besaril welcomed Ministers Ruiz-Maduro and Bikker at the Amsterdam Schiphol Airport on Tuesday morning. A group of artistes also arrived from Aruba that day in connection with the Aruba Day festivities in Rijswijk this Sunday where the artistes will perform.

Ruiz-Maduro is in the Netherlands mainly to discuss the financial crisis in which the new Aruba Government finds itself. She is preparing a rescue plan with several austerity measures to bring down the 275-million-Aruban-florin deficit anticipated in the draft 2018 budget.

She will not only meet with Knops later this week, but also with Chairman of the Aruba Board for Financial Supervision CAFT Raymond Gradus and with Dutch Minister of Education, Culture and Science Ingrid van Engelshoven.

Ruiz-Maduro will also meet with representatives of the Central Bureau for Statistics (CBS), the Dutch Central Bank DNB, the Netherlands National Restoration Fund and the Netherlands Foreign Investment Agency NFIA.

Bikker will meet with his Dutch colleagues Minister of Justice and Security Ferd Grapperhaus and State Secretary of Security and Justice Mark Harbers this week.

Meetings are also scheduled with Council of State Vice-President Piet-Hein Donner and former Minister of Antillean and Aruban Affairs Professor Ernst Hirsch Ballin. Bikker will also pay a visit to the Royal Marechaussee at Schiphol Airport and to the prison in Zaanstad.