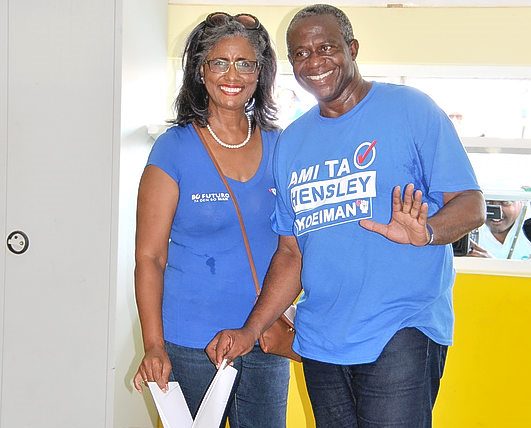 PAR received 18,362 of a total of 78,815 votes cast in the election that was observed by a four-member team from the Caribbean Community Caricom. It was the first time Rhuggenaath participated as political leader.

PAR was one of 11 parties that contested the poll, two less than on October 5, 2016 when three parties each won four of the 21 seats in Parliament.

One of the country’s oldest parties “Partido Nashonal di Pueblo” (PNP) led by Humphrey Davelaar did not receive enough votes for a seat in Parliament. This will be the first time the green party is not represented in the legislature since it was established about 70 years ago.

The preliminary results indicate that PAR will have six seats, MAN and MFK five each, KdNT two and PIN, PS and MP one seat each.

The 21 seats in Parliament are chosen through the system of proportional representation. Parties already represented in parliament are admitted to the next election. New parties must exceed a threshold in pre-elections stipulated by law as one per cent of the number of valid votes in the previous election.

Friday’s elections followed the collapse of the Koeiman Cabinet installed following the vote of October 5, 2016 after just seven weeks in office. The MAN-led Government fell on February 12.

Immediately thereafter, new elections were called for April 28, to the disagreement of the new MFK/KdNT/PS/MP/Braam/Dannawi majority that appointed an interim cabinet on March 24 led by now caretaker Prime Minister Gilmar Pisas.

On March 31, the Netherlands put Governor Lucille George-Wout in charge of the elections because the interim Government wanted to cancel them. Dutch Minister of Kingdom Relations Ronald Plasterk and the Kingdom Council of Ministers in The Hague prevented this.

“It is of the utmost importance that the people of Curaçao express themselves in free and fair elections about the future of the country. The actions of the interim cabinet have seriously affected the integrity of the electoral process. Therefore, the Kingdom Council of Ministers considers it necessary to give the Governor the power to ensure a proper course of the elections,” he declared at the time.