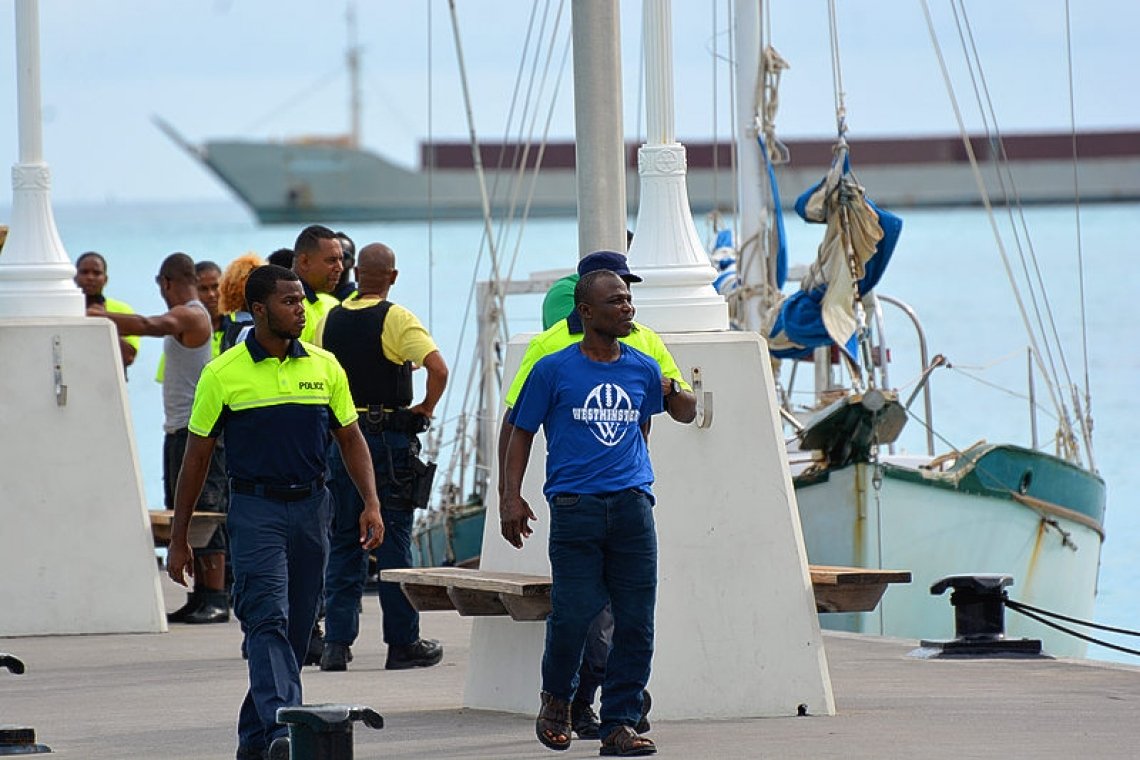 Police and Immigration officers intercepted the crew and passengers of sailboat “Solitude” at the pier near Walter Plantz Square on October 3, 2019. (File photo)

PHILIPSBURG–Three crew members of a sailing vessel from Dominica who were detained by the St. Maarten Police Force KPSM on October 3, 2019, on suspicion of human-trafficking were sentenced to two years by the Court of First Instance on Wednesday. During the February 5 hearing of this case, the Prosecutor had requested prison sentences ranging from forty to 54 months.

Suspect Miguel Jean-Baptist (24) was facing the highest penalty of 54 months. The prosecutor demanded a prison sentence of 50 months for co-defendant Edison Bernard Cornelius (42) and 40 months for Monsel Michael Maxwell (38).

The Court found all three suspects guilty of having tried to smuggle 14 illegal migrants from Haiti on board the small sailboat Solitude, which was docked at the pier near Walter Plantz Square in Great Bay without first clearing Customs and Immigration on October 3, 2019. As an additional punishment, the Court ordered the confiscation of the sailboat, which was owned by Cornelius.

The passengers from Haiti boarded the vessel on October 1, 2019. They had to pay US $2,000 each for the trip of approximately 189 nautical miles from Dominica to St. Maarten. The departure was delayed for a few days, among other reasons, because there was a ship from the Dominica Coast Guard out at sea.

The three defendants were the boat crew, with one of them receiving instructions by telephone. The crew did not want to arrive in St. Maarten by daylight, as they feared being arrested. Therefore, they decided to sail from the coast of St. Maarten toward St. Kitts until they were instructed to return to St. Maarten.

When a crew member was approached by a police officer shortly after mooring at the Walter Plantz pier, the other crew members urged their passengers to be quiet and stay out of sight. The 14 undocumented Haitians were nevertheless discovered and taken off the boat.

The judge stated in the verdict that he found human-smuggling proven, as the defendants knew that the Haitians did not have any title to stay in St. Maarten. He also found it proven that they had committed this crime for financial gain, but the Court did not find evidence that the defendants had also assisted the Haitian nationals in gaining entry to St. Maarten.

In sentencing, the judge stated that “enormous” risks are being taken in human-smuggling. “The smuggled persons, as well as the crewmembers, have put their lives at risk by embarking on that little crowded boat without proper equipment,” he said.

The small sailboat was not equipped with the basic necessary radio and navigational equipment, lifesaving equipment and documentation to undertake an international voyage with passengers.

During the hearing of this case, attorney-at-law Geert Hatzmann had pleaded with the Court to declare the prosecutor’s case against Cornelius inadmissible, due to a serious incident during his client’s pre-trial detention in the Pointe Blanche prison during which he was taken hostage and threatened. Co-defendants had mistreated and threatened his cellmate and sent video-images of the violent incident to the cellmate’s sister to extort $1,500 from her.

According to Hatzmann, the Prosecutor’s Office had so seriously breached its duty of care, by holding the suspect in a place where he must fear for his life daily, that it had forfeited its right to prosecute.

In the Court’s opinion, it was clear that the hostage-taking constituted a serious violation of standards. However, the judge wondered what consequences the incident should have. The violation was caused by a co-defendant and by “failing supervision” in the house of detention, the judge said, “but the fact remains that the handling of the criminal case meets the requirements of a fair trial,” he added.

He said that inadmissibility of the prosecution’s case would not restore the violated standard, and, furthermore, would detract from the protection of society – which is an important goal of criminal justice.

“It must be possible to prosecute punishable behaviour, also here in St. Maarten, and serious crimes require a deterrent punishment. Therefore, the Prosecutor’s Office is admissible in its prosecution,” the judge said.