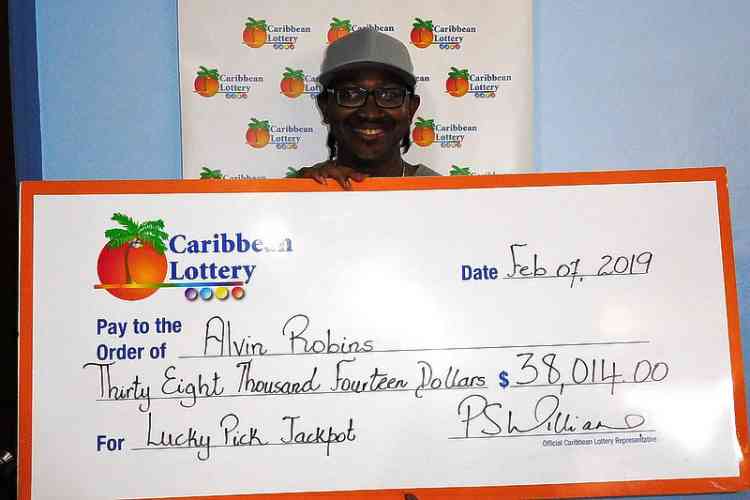 An excited Alvin Robins is all smiles as he shows off his cheque for $38,014 from his recent Lucky Pick win.

PHILIPSBURG–Caribbean Lottery has paid out more than US $108,000 to one Lucky Pick and two Pick 4 winners.

A few days ago, Pick 4 player “I.B.” won US $40,000 with lucky number 1941. B. bought the same number again and secured another US $20,830. This lucky number represents the year his father was born. ”I.B.” is extremely grateful for his wins as he was able to complete a project and he looks forward to greater financial plans. “My project was able to be completed with the winnings I had before.  With this win, I will look into other possibilities of investment,” the winner said.

Alvin Robins joined in on the winning streak with Lucky Pick. Going away on vacation did not stop Robins from playing his favourite game as he asked his agent to play his numbers in his absence.

Robins received a call from the agent advising him that he was the Lucky Pick winner of $38,014. “I could not believe the news, the best I have ever had in a very long time. The sleep and everything immediately went away.”

The winning numbers 05, 07, 09, 10 and 12 all represent birthdays of persons close to Robins. “Winning never felt this good, I am very grateful,” Robins added. He is especially grateful for the timing of his win as it will assist in the construction of his new home. “I started building my home, so this windfall happened at an opportune time in that it will allow me to go much further with my construction, and, of course, I will treat my wife to something really nice.”

Ursuline Victor is another long-time Caribbean Lottery player who has been playing Pick 4 since the game was introduced. Victor said her fiancé recently gave her the number from a vehicle’s license plate. She purchased the number 1417 and won US $10,000. “Somehow, I could not shrug off the lasting memory of the number, so I decided to buy the vehicle license number, which resulted in my windfall.”

Victor expressed her enthusiasm for Caribbean Lottery’s Pick 4 game: “The game is fun to play, and the pay-out is great. I have won several times, playing this game.  In the past, I have won US $12,000 with many other lower prizes.”

Victor is extremely excited and grateful for her win. She intends on saving the money while she properly plans how she wants to spend it. “This amount will allow me to do something I could not do before,” she said.

The Pick 4 player did not hesitate to share words of encouragement with her fellow lottery players, “For all those players out there, I would encourage you to keep on playing, do not give up, because you too can be the lucky person.”

Site Operations Manager at Caribbean Lottery Paula Williams was excited for the lucky players. “We are so delighted to share these moments with our players. They have shown much dedication and we are happy to see them reaping their rewards over and over. We are especially happy to know that they will be able to complete major projects and work towards a brighter future.” Williams congratulated the winners and wished them all the best on behalf of the Caribbean Lottery team.