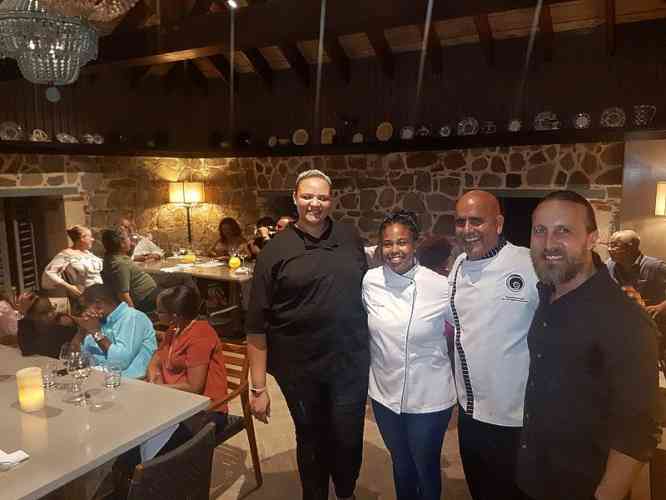 CUL DE SAC–St. Maarten is known as the “culinary capital of the Caribbean” and it is a moniker claimed and held on to even after the ravages of Hurricane Irma four months ago. The local show of hospitality through food was in full bloom in Emilio’s restaurant on Wednesday night when three St. Maarteners combined their talents in the kitchen to take diners on adventures via their taste buds.

Young St. Maartener Tracy Blijden, who is honing her skills in Bavaria, Germany, is home for the holiday. Blijden, daughter of Alfonso and Fè Blijden, has not been allowed to just meet family and explore her favourite stops. She was conscripted by Emilio’s Executive Chef Dino Jagtiani for a dinner highlighting what St. Maarteners working together can achieve – world-class food with pure heart and friendliness.
Her love for food and her island were very visible in her dishes. Blijden’s relationship with food started very young, helping her father in his catering business.
Choosing Blijden as Emilio’s first guest chef was a culinary no-brainer, according to Jagtiani, who was the island’s first graduate from Culinary Institute of America (CIA). His trail-blazing steps have since been followed by a number of other St. Maarteners.
“Tracy has talent. She reminds me a lot of myself when I started out 20 years ago with Temptation restaurant. She is driven and willing to take culinary leaps. I love working with like minds,” he said.
Jagtiani said he is trying to convince Blijden to come home, if her job permits, to return home later in the year and be part of the St. Maarten culinary team for the Taste of the Caribbean competition.
In the kitchen with Jagtiani and Blijden was fellow Emilio’s Chef Renata de Weever. She and Jagtiani have been cooking up dishes for Emilio’s diners since its opening in November 2017. She too welcomed the energy and challenge of working with Blijden.
Together, the trio made diners’ palates dance with hors d’oeuvres of oxtail croquettes, barbeque aioli, roasted pepper made by Blijden, sliders with bacon jam and cheddar by De Weever and baby potato with truffle-mayo and crispy chicken skin (Jagtiani).
“I like the burst of flavour when you bite into the baby potatoes. … I wanted more. … The flavour was great,” Shasa Lake-Philip said.
Appetisers were also taste-bud-pleasers: plantain roti with curried shrimp, tropical fruit chutney made by De Weever.
“The mango salsa was a good combo with shrimp. … Sometimes people overcook shrimp.