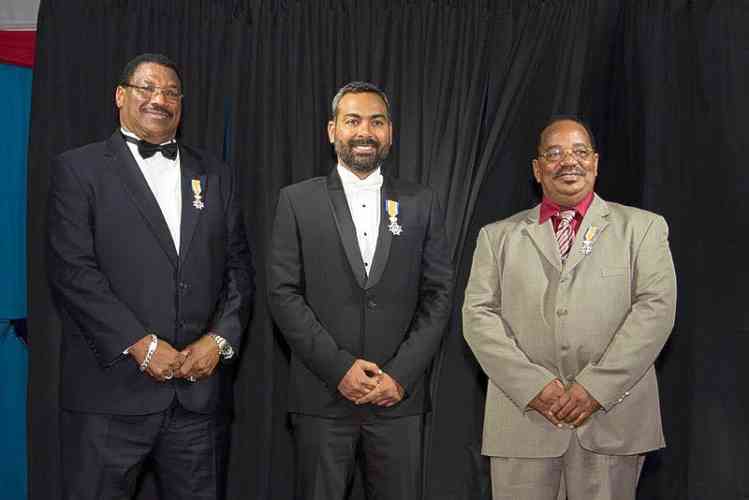 PELICAN–Rajesh Chintaman, Merlin Aventurin and Leonel “Photo Gumbs” Gumbs received royal decorations on the eve of King Willem-Alexander’s 52nd birthday for giving of themselves in volunteer work and for being their “Brother’s Keeper.”

Governor Eugene Holiday pinned the recipients, on behalf of the king who is grandmaster of the Order of Oranje-Nassau, at a ceremony held in Simpson Bay Resort on April 26. The governor chose “My Brother’s Keeper” as the theme of the evening to reflect the honourees’ work.

Conferred as a Knight of the Order of Oranje-Nassau is Rajesh Chintaman. He was recognised for his work with young people in the areas of mentorship, community health awareness and combatting poverty. Chintaman is known for his extensive work with St. Maarten AIDS Foundation and Bishop Ellis Foundation for the Poor and Needy.

Chintaman’s work, especially with the AIDS Foundation, has broken barriers and crossed borders to heighten awareness about the HIV/AIDS epidemic and challenge young people to life safer, more informed lives.

Now Member of the Order of Oranje-Nassau Aventurin received his honour for humanitarian service at a very young age. As a student, on hearing about vehicle accidents he would always rush to the scene to give assistance even if it was just to comfort the survivors.

Aventurin’s chivalrous nature led to him to the Philipsburg Boy Scouts where his passion for voluntary service was further shaped, as was the realisation that he wanted to be able to give emergency health care. He was a member of the Red Cross Chapter of St. Maarten from 1981 to 1991 and since then has volunteered with Windward Islands Emergency Medical Services (WIEMS) for the past 26 years. He also serves as an instructor for the American Heart Association.

Also conferred with the title of Member of the Order of Oranje-Nassau, Photo Gumbs, as is he is affectionately known, has balanced his life as a busy businessman with volunteerism. He has brought awareness of the medical field to schools, businesses and the community as a trained American Heart Association instructor and WIEMS board member for the past quarter-century.

He has shown exemplary initiative and leadership skills by forming a fundraising group within WIEMS to purchase a new ambulance to support the foundation’s voluntary medical work. He has also driven the ambulance for events including Carnival and school events, and when the Red Cross needs extra support.

Speaking of the honourees, Holiday said their longstanding service and passionate involvement in the community through healthy lifestyle programmes, awareness campaigns and emergency care, response and training are commendable.

He said his description is “but a brief summary and does not do justice to the level of giving, community involvement and sense of responsibility and care demonstrated by these individuals. Their committed involvement in helping others in our country is, as such, an example for all of us to become more involved as our brothers’ keepers.

“They have as a result helped to positively influence the lives of many of our brothers and sisters in need of guidance and medical care in our country. … Their committed involvement in the care for the health, wellbeing and development of others exemplifies the saying ‘My Brother’s Keeper’,” the Governor said.

Prior to revealing the honourees, Holiday asked invitees, who included several knights and members of the order, “Can you say, ‘I am my brother’s keeper’? This question has been around forever.” This is exemplified, he said, in the story in Genesis, the first book of the Bible, where Cain is asked by God about the whereabouts of his brother Abel and he replies: ‘I do not know – Am I my brother’s keeper?’”

Cain’s answer means that he does not feel responsible for and does not care about his brother’s wellbeing.

“In our present-day mindset, Cain’s response would be: ‘And how is that my problem?’ From a broader context, it is an age-old question that goes to the heart of social relations in our society. It is, at its core, a question about that which connects and keeps us connected as people and as societies,” said the Governor.

A total of 63 royal decorations were conferred in the Dutch Caribbean on the occasion of the king’s birthday. There are four new knights in Curaçao and 10 new members of the order. In Aruba, the title of knight was conferred on 11 persons and that of member of the order on 24 persons. One person received the title of Member of the Order of Oranje-Nassau in Bonaire.

There were no royal honours for anyone in Saba or St. Eustatius.