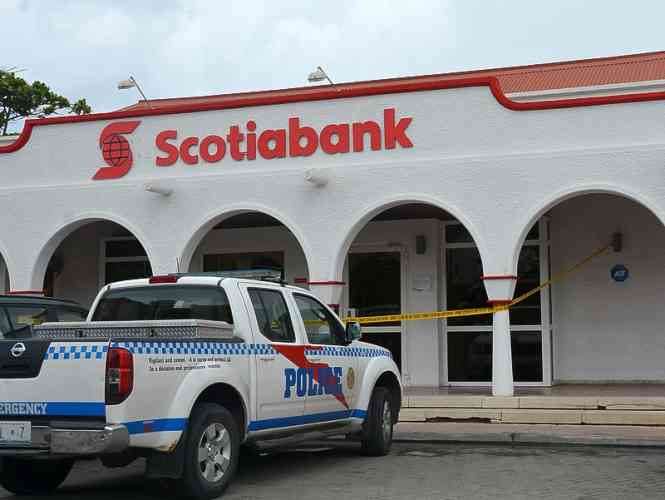 PHILIPSBURG–Three young men received prison sentences of five and four years on Wednesday for the roles they played in the armed robbery of Scotiabank in Simpson Bay on June 9, 2017.

The Prosecutor’s Office called for six- and eight-year prison sentences for the four suspects in this case. Suspect S.E.L.W. (23), who is held as the driver of the getaway car, will learn his fate on February 7. The Prosecutor called for six years for being a co-perpetrator in this case, but the Judge said he needed more time to reach a verdict.
The Court sentenced co-defendants Shaquille A. Every (24) and Dillon Jones (23) to five years. The Prosecutor had demanded eight years for Every and six years for Jones.
Nikhal Otto (25) received four years; the Prosecutor had called for six.
In sentencing, the Judge said there was sufficient proof to consider theft with violence and possession of illegal firearms proven.
Three men stormed into Scotiabank at Simpson Bay Yacht Club around 8:45am on June 9. One of them smashed the entrance door after a security guard tried to deny them access.
As the vault proved inaccessible, the robbers turned to the bank’s customers and took US $1,700 in cash, as well as cell phones and documents.
Scotiabank security officers and staff managed to sound the alarm and alert police that a robbery was taking place. The men ran to an unmarked Hyundai Accent with tinted windows that was parked outside the bank and drove away.
A high-speed chase followed immediately, at which time the suspects abandoned the vehicle and took off on foot. A foot chase followed on Simpson Bay Beach during which Otto pulled a high-powered assault rifle, similar to an AK47, from under his shirt and aimed it at the officer in pursuit. This left the officer no other choice than to fire directly at him. Otto dropped his weapon and continued to flee, but had to stop because he had been shot in his arm. He was immediately arrested.
Suspect W. also was wounded during his arrest. He was bitten by a police dog, his lawyer Safira Ibrahim claimed.
In itself, a bank robbery is not worse than those committed at supermarkets or restaurants, the Judge said. However, this robbery had caused a lot of commotion in the Simpson Bay community, which should be taken into account in sentencing, he said.
The Judge also considered that the robbery had not been very violent, although the robbers had threatened to use violence.
Even though they were apprehended approximately 30 minutes after the robbery, only Every came clean. Without providing details, he said he had made a “bad decision” that day.
“I was going through bad times and was not thinking straight. I needed money and the temptation was too big. I’m sorry now,” he said, without providing any information about his co-defendants.
Jones and Otto remained silent and referred to their lawyers, whereas W. said he had nothing to do with the robbery.
W. and Otto were found hiding in the bushes. Every, who had the stolen money with him, was arrested on Simpson Bay Beach shortly thereafter and Jones was found in a vehicle. All defendants are repeat offenders.
The Prosecutor commended the Simpson Bay community for assisting the police in finding the suspects. He said the police officers and the security guard who had declined to open the door for the suspects are the “real heroes in this story,” as well as the mother of a baby who had refused one of the fleeing robbers entrance to her house.
The lawyers primarily pleaded for lesser sentences and pointed out the deplorable conditions at the Pointe Blanche prison after Irma.
“As soon as it rains, water starts to run in the cells and walls are on the verge of collapse,” attorney Shaira Bommel said.