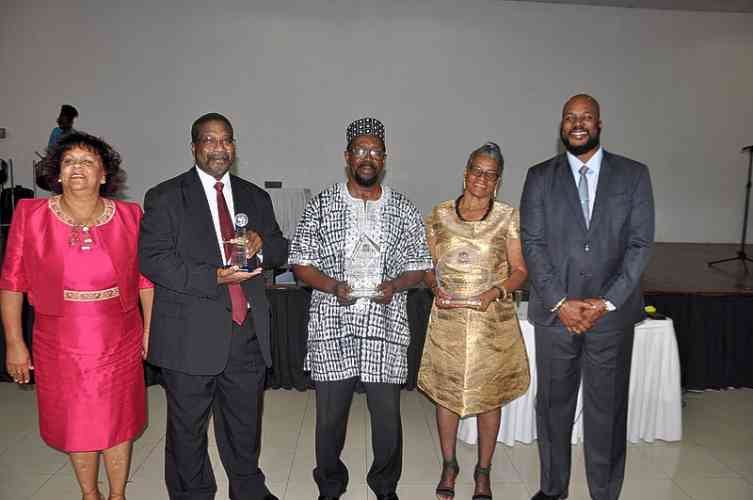 PHILIPSBURG–The Windward Islands Chamber of Labour Unions (WICLU) honoured three persons for their tireless efforts in advancing the rights of workers over the years at a Labour Day reception held at the Belair Community Center on Wednesday.

The event was themed: “Honouring the heroes of the past, building the future of decent work.” The Most Impact award was given to Workers Institute for Organised Labour (WIFOL) President Theophilus Thompson for winning a number of court cases for workers who were denied certain benefits after Hurricanes Irma and Maria; the Most Historic award was presented to first local President of the NAPB police union Carlyle Rogers for helping to lay much of the groundwork for the union and for firmly representing workers in the disciplined services, and receiving the Spirit of Labour award was Diana Windefelde for working tirelessly behind the scenes with the Windward Islands Teachers Union (WITU) over many years.

WICLU President Claire Elshot said unions chose to honour persons who have made “valuable and strong” contributions in the development and building of the workers organisation to impact and defend the rights of workers in a very special way.

“What is so important in this is the fact that for a few years already on Labour Day we have been able to recognise the hard work and dedication of a number of persons who put themselves on the frontline of the struggles and battles and still are willing and able go the extra mile in defending others workers’ rights. That in building the future of decent work,” Elshot said.

“In Sint Maarten, we are, at this moment at the crossroads in a process of rebuilding after the devastation of hurricanes and as strong workers we can and must achieve our goals of setting standards…to build the future of decent work for our youths also.”

Acting Minister of Labour Miklos Giterson said Labour Day is about celebrating workers, reflecting on all that they do and how much they should be appreciated. “Workers are the backbone of every organisation. The motor of our economy. Without their dedication and commitment, St. Maarten would not have recovered as quickly as we did,” he told attendees. “As a country, we came together – government, employers and workers to rebuild and once again show the world the beauty of St. Maarten, and it is for this reason that today on Labour Day, we must celebrate the achievements made so far and acknowledge our local labour ambassadors.”

Giterson said the theme of this year’s celebration reminds him of something that Labour Minister Emil Lee often states, which is that “a true recovery process can only happen with local participation.” He said he agrees entirely with this statement. “We all will struggle and we all will benefit. Government can only do so much alone. Only united can we achieve more for people and country. My mother has always taught me that progress is a continuous movement, so let us continue moving forward together while we re-build our future and achieve decent work for all.”

Thompson has been a member of WIFOL since 1982. He was elected to the function of Shop Steward in 1984. Between 1985 and 1991, along with other trade union colleagues from the Caribbean and Latin America, he participated in industrial relations training sponsored by the International Labour Organisation (ILO), CARISFORM and Central Latin American Workers (CLAT).

In 2002, with a clear vision to train and re-train workers, he established the Caribbean Institute for Social Education Foundation (CIFSEF). In 2003, he was appointed to the board of the Caribbean Workers Council.

Windefelde was born in 1952 in Aruba. In her earlier years, she moved to St. Eustatius with her parents after their retirement in Aruba. While on Statia she completed her education. As a young girl, she had a passion and desire to become a teacher. This dream came through for her in 1970 when a job became available for her as kindergarten teacher at the Bethel Methodist Church. Windefelde worked and served members and students of that school for one year. Then Governor of St. Eustatius Alberto Mathew sent four young candidates, of which she was one, to St. Maarten to study to become fully qualified kindergarten teachers.

After four years of studying, in 1977, she successfully became a qualified Kindergarten A teacher. Some years after another opportunity presented itself where she could study to become principal. She was granted and accepted to follow the course and successfully graduated in December 1998, with her diploma for Kleuter Leidster B.

During the years of working, Methodist Minister Reverend John Gumbs changed the name of the school to Methodist Agogic Center in 1975. Windefelde worked at the Methodist school from 1971-1993 when she resigned and went to work in Public Education. She was placed in the Care Bears Kindergarten in Sucker Garden where her function was Vice Principal. Then all public schools were split up in the various areas and Windefele was placed in Dutch Quarter at the Dr. Martin Luther King Jr. Kindergarten. Her function there was Vice Principal.

After serving in that position for several years in 1998 she was appointed Principal of Dr. Martin Luther King Jr. In 2004, the education system changed and became Foundation Based Education. She was then given the task of Cycle 1 Coordinator and worked in this function until her retirement in 2012. Windefelde has been an active member of WITU for more than 25 years. She served as a full board member. After elections, she was voted in as Assistant Treasurer, a post that she held for many terms. She was dedicated and worked closely with Treasurer Robert Rawlins. In 2016, Windefelde became an ordinary Board Member. She is still active and functioning in WITU. She happily expressed that her knowledge and experience increased while working closely along with her team.

Windefelde knows how important it is to be a member of the union. She continues to actively advocate on behalf of educators and education staff in securing their rights.

Rogers Sr. was born in St. Maarten, on September 11, 1963. After attending the St. Joseph Primary School in St. Maarten, he moved to Curaçao to further his secondary education. On February 14, 1986, he joined the then Royal Police Force of the Netherlands Antilles. After completing the Basic Police course and working on Curaçao and Saba respectively, he was transferred to St. Maarten in December 1989. During 2000, the Royal Police Force of the then Netherlands Antilles went through a re-organization where, according to him, there was no equality in all the Dutch Caribbean islands.

Seeing that Rogers believes in equal rights and treatment for all workers no matter his/her gender he decided during 2002 to bring about a vigorous awareness within the Police Force in St. Maarten, Saba and St. Eustatius. It was a struggle yet he achieved his goal. All functions and ranking systems on all the islands became equal. This is when on St. Maarten, Saba and St. Eustatius received the most chief inspectors, inspectors and majors ever.

After this achievement, the members of NAPB, decided that they needed a strong leader and a change in their representation as union leaders and he was encouraged to join the NAPB, which he did. From 2002 to 2011, he was a congress member of the then NAPB representing St. Maarten, Saba and St. Eustatius. During 2011, he became the first-ever president of NAPB district St. Maarten for three years. Rogers left no stone unturned when it came to representing members of the NAPB. His track record speaks for itself over the 10 years that he has served members.