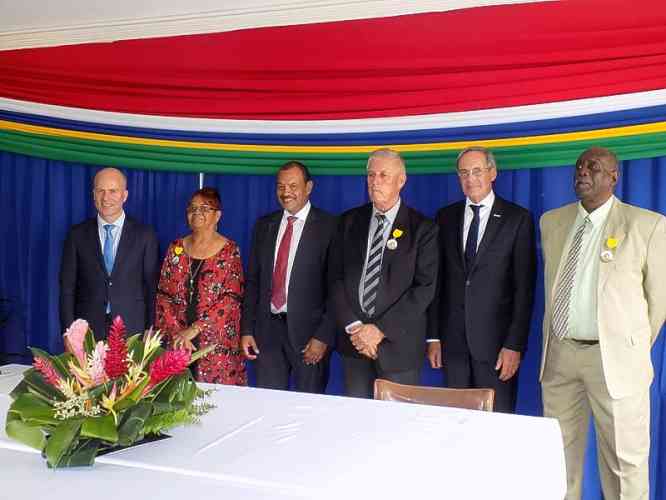 On the initiative of then Commissioner of Culture Clyde van Putten, the Island Government proposed to create a programme for honouring individuals who did something special for the island in 2011. This resulted in the Golden Rock League of Merit, which works along the same lines as the Dutch national royal decorations but without ranks.

Government Commissioner Marcolino “Mike” Franco addressed the attendees in the presence of State Secretary of Home Affairs and Kingdom Relations Raymond Knops and other dignitaries.

“It is a great honour for me that I can hand the Golden Rock League of Merit to some special citizens. The purpose of this award is to recognize and honour the activities of these special and committed citizens,” said Franco. He congratulated the honourees and then pinned the medals on each individual.

Edwin “Tom” Phillips (69) was very instrumental in promoting baseball and softball in St. Eustatius. Together with Sunny Rhoda and Rudy Busby, he formed four teams to start a local competition. He became president of the Sports Federation in 1981 and retired in 2016. During his presidency, several sports facilities were erected on the island. He is still involved in softball as coach/team manager of the Lions, the 2018 champions.

Wim de Jong (68) received the medal for Outstanding Contribution to Society. He was born in Gouda, the Netherlands. Upon his arrival to Statia on August 2, 1977, he started as a project supervisor for the important Claes Ghut project for the protection of the above-situated buildings in Oranjestad.

The restoration of Fort Orange was then already in full swing and because the project supervisor of that project had to return to the Netherlands, De Jong took over this project. ln 1979, he decided to remain on the island and started Woudenberg Windwards NV. With this company, he led many restorations and new construction projects. Currently, he is the external controller for the roof assistance programme, which is financed by the Ministry of Home Affairs.

Vera Simmons-Sprott (78) started her career as assistant teacher at Bethel Methodist School. She later worked as an assistant nurse at Queen Beatrix Medical Centre and as a kindergarten teacher at Golden Rock Roman Catholic School, a career that lasted for 33 years and ended in June 2004. While on pension, she substituted for many schools on the island and participated in different programmes in helping to mould Statia’s youth.