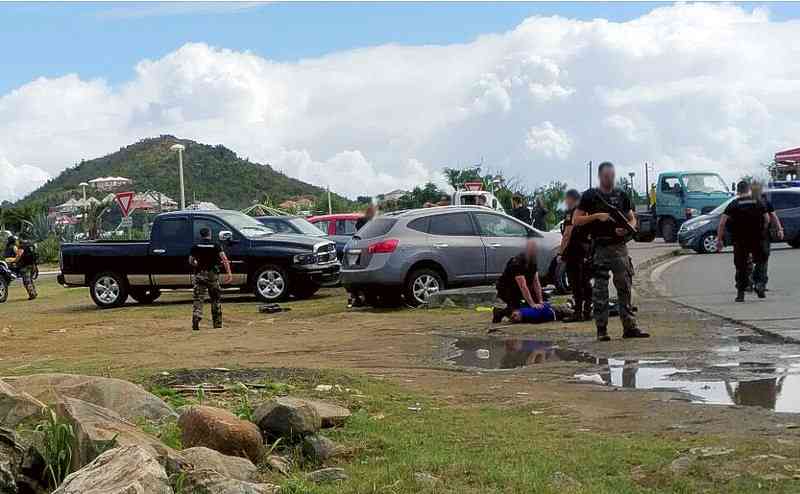 MARIGOT–Swift response from the Gendarmerie brought a dramatic end to Monday’s Loterie Farm armed robbery with all three suspects apprehended in Hope Estate after their escape bid was thwarted by roadblocks at the Cul-de-Sac roundabout.

From the moment of their flight from Loterie Farm to the suspects’ capture in Hope Estate it took just 15 minutes while the whole drama played out in 30 minutes. The daring armed robbery shattered what has been a long period of calm on the French side.

The Loterie Farm victims; caretaker manager/director William “BJ” Welch and three staff members, were tied up and held at gunpoint in a temporary office while the robbers stole money, phones and handbags.

“We were preparing the January payroll in my house at about 10:00am, as we have had a lot of temporary daytime workers to pay, and suddenly these three masked men, dressed head-to-toe in black, burst into the office,” BJ told The Daily Herald. “One of them had a gun and the other two had machetes. The one with the gun hit me on the back of the head with the butt and I fell to the floor. He then pulled out cable ties and tied my hands and feet, and then tied the hands and feet of my three colleagues.

“They asked where the phones were and the money. They took all that and more money that was in another room. Then they took a female colleague, held a machete to her throat and took her to the safe, but I am the only one who knows the combination, so they cut me loose and forced me to open it.

“But they hadn’t realised that the maid had just come into the kitchen behind the office. Hearing all the commotion she realized a robbery was going on and ran out screaming for someone to call the Gendarmes. The robbers then panicked and escaped.”

BJ said their escape route was Rue de Loterie, a track that passes through the property and meets the road leading to the village of Colombier. They had a getaway car waiting where the track meets the road, and fled toward La Savane and Grand Case.

“Once they had gone I jumped into my pick-up truck to see if I could intercept them,” BJ continued. “As luck would have it, I saw their vehicle coming out from the Colombier turning and that enabled me to quickly give the details of the vehicle to the Gendarmes.”

Despite the blow on the back of the head, BJ said he was not badly hurt, but shocked. His three colleagues were uninjured, but traumatised by the incident.

“This was not a random act, it was planned and well organised,” he added. “But it turned out well because of an incredible collaboration between us and the Gendarmes.

“Whoever organised this knew me or had been studying my movements. It was most likely an inside job, because since the hurricanes we have had a lot of transient day workers cleaning up the property. I do have two aggressive guard dogs that roam the property at night, but they are put back into a pen at 6:00am and then let out again at 6:00pm. The robbers probably knew that too.”

BJ said the incident has changed his life. “Now I feel I need to be calculated, paranoid and protective every day. These are different times we live in. The new order in this world is disorder.”