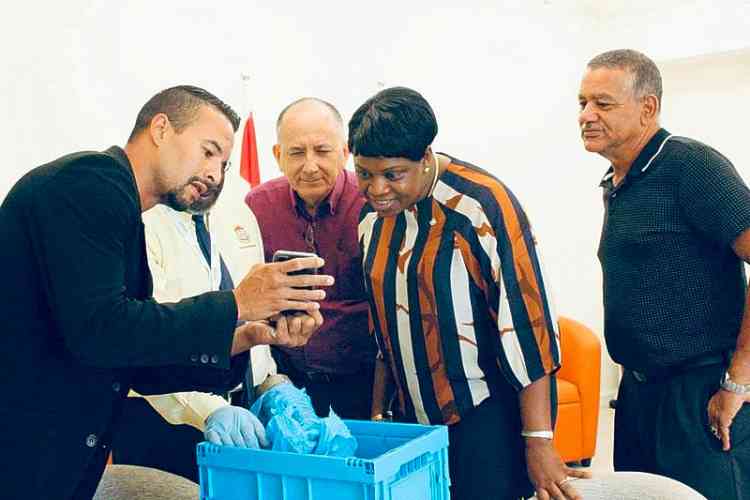 PHILIPSBURG–The Hurricane Irma-ravaged old Government Administration Building on Clem Labega Square still had a valuable contribution to the country’s history that was unearthed on Wednesday, thanks to the dogged efforts of two historical-minded civil servants.

There are copies of the law governing the island territory status and the 1975 Democratic Party Programme in the capsule, but for those eager to learn more about what’s in the capsule, they will have to wait until the 44 year of its burial is reached. The good news is that is only months away. The capsule is to be opened on this St. Maarten’s Day, November 11, exactly 44 years after it was buried.

The time capsule was buried on the upper level of the building in what would later become the Dr. A.C. Wathey Legislative Hall under the designated chairperson’s spot in 1975. In later times, when the building was still in use it stayed quietly under the foot of countless Island Council members and commissioners as they stood at the podium to deliver addresses.

The capsule, buried on November 11, 1975, also witnesses the footfall of the last Island Council members and commissioners of the Island Territory of St. Maarten and the first prime minister of the newly birthed country within the Dutch Kingdom as of October 10, 2010.

The existence of the capsule was recorded on a commemorative scroll found in government’s archives. The two civil servants on the case were Archivist Alfonso Blijden and Senior Facility Officer for the Department of Facility Services Henderik Ekema. Blijden was alerted to the capsule by retired civil servant Louis Duzanson.

Ekema told The Daily Herald that finding the capsule took several months of detective work. Piecing through documents from 1975 to 1978, locating the commemorative scroll and old photos of what the hall originally looked like, were critical to Wednesday’s find. “It was a very, very exciting moment,” Ekema said.

It was not all scanning through documents, recovering the capsule also took physical work. The floor of the storied hall had to be jackhammered in search of the item.

The commemorative scroll lays out the situation of St. Maarten at the time of the capsule burial. It states: “Following the election of 1975, the Democratic Party, under the leadership of A.C. Wathey was voted into office without opposition.”

It goes on the list the members of the then Island Council starting with the now late Max Pandt, born in February 16, 1939, on St. Eustatius, as Lt. Governor, appointed by Royal Decree of September 16, 1975, No. 3, for a term of six-years. Next was Albert Claude Wathey, Officer in the Order of Oranje-Nassau, July 24, 1926, on St. Maarten, Member of Parliament of the Netherlands Antilles and member of the Island Council, “elected in 1951 and in every election thereafter.”

Also, in the council were Joseph Emmanuel Richardson, August 8, 1945, on St. Maarten, member of Island Council since 1971, and commissioner in the daily government for education, finance, sports, and recreation; and Samuel Wasman Hazel, born December 19, 1934, on St. Maarten, member of the island council since 1971 and commission in the daily government for public works, airports, harbours, communications.

Raymond Sinclair Nicholson, born November 13, 1929 on St. Maarten, was a new member of the island council as was Rupert Isaac Maynard who was born on November 13, 1932 in the Dominican Republic. They were both elected in 1975.

The building was designed by the project management consultants firm of Promac N.V. and the work was supervised by a team led by Mr. J. Schuurbiers. It was financed in part by a short-term loan from the Netherlands and in part by a long-term loan of 15 years at 9.5 per cent jointly from the pension fund of the Netherlands Antilles and from the pension fund of S.E.L. Maduro and Sons Inc. The cost of the building was NAf. 1,500,000. All departments of the island government and certain offices of the central government will be housed in the building.

At this time of the ceremony capsule ceremony, the island was administered by the island regulation P.B. 1951 No. 39. “A copy of this law is enclosed in this cylinder,” according to the information on the scroll.

The expenditures and revenues of the annual island budget at the time, according to the scroll, was 8.5 million and 8.4 million respectively.

“Tourism as the island’s major industry will bring visitors from the USA, Canada, Europe and the surrounding islands. Large numbers of local people will find employment during this most promising season,” predicted the scroll.

New political status following the elections in 1973 and 1975: “the central government set about preparing plans for granting a large measure of decentralization and self-government to the six islands of the Netherland Antilles .These plans were part of the preparations being made for the time when, by mutual agreement, the islands would become independent of the kingdom of the Netherlands.”

The government of the time states on the scroll: “The language of the people of St. Maarten is English and though Dutch is the official language of government and also of education, it is seldom heard outside classrooms .The government earnestly seeks to have English recognised as the official language, in place of Dutch, thus making it possible for children throughout the educational system to receive the major part of their education in their mother tongue.”

Back to the present day: Without the dogged determination of Ekema, the capsule and its content may have well been lost. The old mould infested and weather-beaten building is slated for demolition in the near future. Their work means a piece of unknown history has been saved.

This almost 44-year old capsule is not the only one in the country. Another lies in wait in front of St. Martin of Tours Catholic Church under Great Bay Boulevard (commonly called the Boardwalk). It was buried there in the early 2000s by St. Maarten Archaeological Centre Simarc.