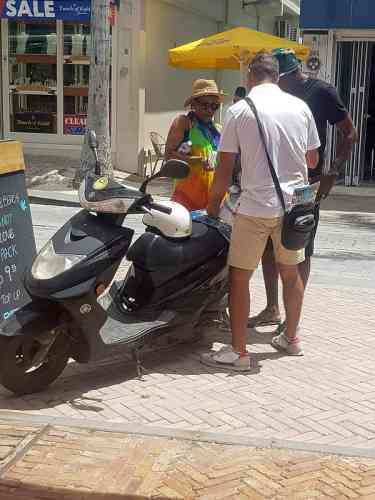 Scratch-card OPCs stopped on Front Street to engage visitors with brochures, maps and scratch cards to lure them to the on-island property they represent.

OYSTER BAY—St. Maarten Timeshare Association (SMTA) has sounded the alarm about the resurgence of “aggressive and deceitful sales practices and gimmicks” that are destined to give the still-recovering and fragile timeshare sector a black eye.

One deceitful sales practice is the reintroduction of “scratch cards” that are passed out to visitors by off-property consultants (OPCs) trying to sell vacation weeks for properties that are off-island. The cards make almost everyone who take the time out to scratch to reveal a prize a winner. The person is then lured into a further sales pitch.

SMTA is a proponent of an increase the country’s destination marketing budget and supports this change as called for by Tourism and Economic Affairs Minister Stuart Johnson. “But, please increase the budget for the Inspection Department as well. It hardly makes sense to promote our island in Europe, North and South America and other countries if our visitors get harassed endlessly while being on our island,” said SMTA Chairman Jelle Hamstra.

SMTA, with an even louder cry from its member Oyster Bay Beach Resort (OBBR), calls on government to regulate what they describe as abrasive and roaming OPCs. A number of these OPCs are peddling vacation rentals that do not exist in St. Maarten in the heart of Philipsburg to visitors here.

OBBR is faced with a very threatening problem from OPCs pushing weeks at another timeshare property just up the road from its doors. General Manager Ricardo Perez told The Daily Herald the OPCs tackle his resort guests as they take a stroll or are driving in and out of the property. The harassment is then reported to his front desk.

“We had to hire more security to deal with this,” said Perez. When the women operating as OPCs are approached they are rude and aggressive, he said. OBBR has contacted the company that hires them, but it was unremorseful about its employees’ action, he said.

The bad image the OPCs are creating must be tackled, said Perez and Hamstra. They pointed out that the association and individual members have approached government for years to properly enforce the “vending regulations” under which OPCs are allowed to operate. There is control for a while and then the situation reverts to the old way.

There is zero consistency in the way government is safeguarding the essential asset that is the timeshare industry, said SMTA officials. The timeshare visitors have proved to be committed to the destination and are considered the backbone of the one-pillar tourism-driven economy. However, if harassment and other issues are allowed to fester, SMTA officials fear a bigger blow to the still-ailing sector.

“The product is so fragile. We do not need any self-destructive practices,” they said.

Another destructive pattern the SMTA officials pointed out is what they referred as the unchecked cosmetic stores along Front Street that are peddling beauty treatments for hundreds of dollars per jar. The “beauty consultants” are usually outside the stores pulling passers-by into the establishment or pushing samples to anyone who happens to walk by. The beauty consultants have no qualms about blocking traffic to grab potential customers.

The vending ordinance has strict stipulations about how permit holders can operate, the SMTA officials said. One of the requirements is that the permit holder must be the one who carries out the vending. However, that is not the case of the OPCs operating in particular just outside OBBR. The permit also requires the vendor to operate from a booth, be in an identifiable uniform and have his or her permit clearly displayed, they said.

Without clear identifiers such as a uniform, OPCs blend into the scenery if there is a control in Philipsburg or elsewhere, and even pretend to be island visitors instead of (illegally) working on the Dutch side.

None of those rules are adhered to and without strong and consistent enforcement by government, in particular that of the Minister of Tourism and Economic Affairs, the SMTA officials fear nothing will change.