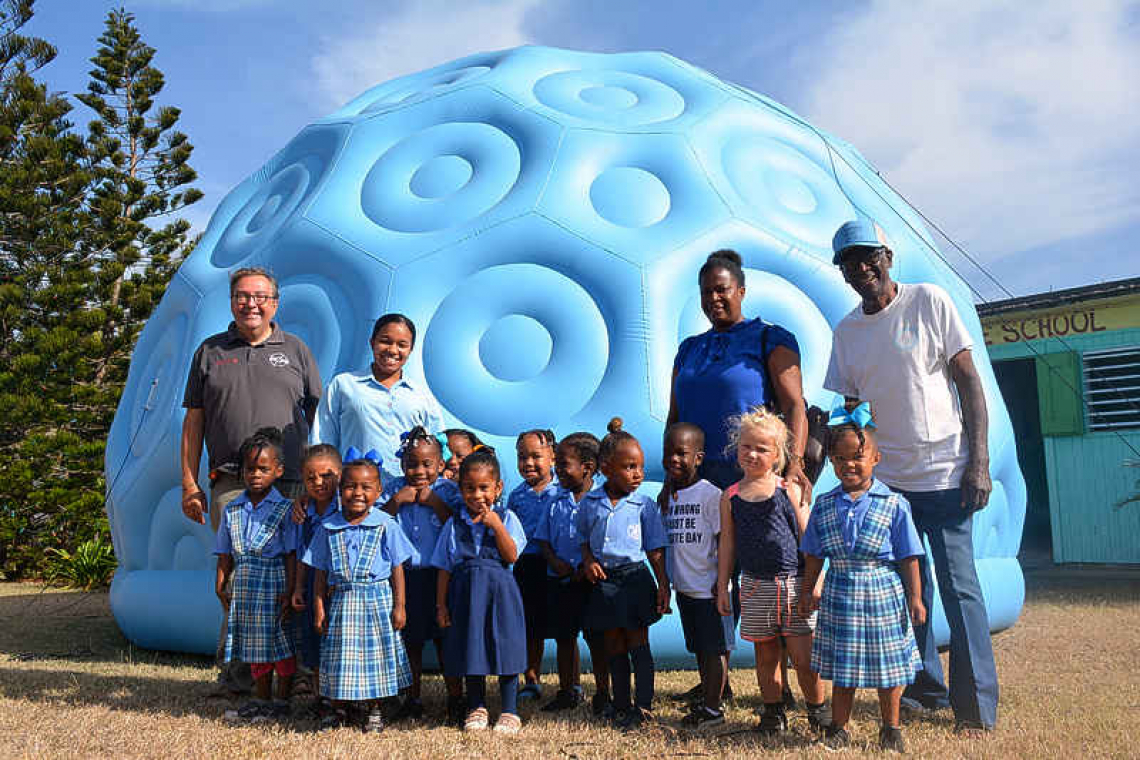 Just before the rocket lifted off in front of the Lynch Plantation Planetarium. In the foreground: Pupils of the pre-kindergarten class. In the background (from left): Jaap Vreeling, teachers Chantal Pandt and Beulah Hassell, and Ishmael Berkel.

ST. EUSTATIUS–Toddlers around three years of age may seem too young to understand the wonders of the night sky, but St. Eustatius Planetarium show master Jaap Vreeling is convinced that a person is never too young or too old to be educated about the fascinating place of outer space.

This week, Bethel Methodist School pupils took a rocket journey to the moon at the St. Eustatius Planetarium.

Indications are that even the toddlers were captivated by their planetarium voyage from the volcanic crater of The Quill to the craters of our lunar cousin. Interviewed after this show, Vreeling was equally impressed by their reaction.

“As a former science teacher, I know that the learning process is best inspired by sparking the imagination. I had to keep things really slow and simple for these children – asking easy questions to get attention and stimulate interest. These kids were really absorbed by our stories from space.”

For the young children, Vreeling started with a sunlit view of nearby Quill volcano that was slowly transformed by the rising moon into a night sky punctuated by countless stars.

“We use computer graphics that locate and change the actual position of stars and planets,” Vreeling said. “These visual effects are stunning and we rely on video animation to explain further the dynamic science of space exploration and discovery. For kids, we rely on cartoon clips to grab their senses. For older audiences, we use more complex yet equally dramatic space scenarios.”

The Bethel Methodist School boys appeared to be transfixed by animated clips of NASA's recent Perseverance Rover as it separated from its rocket and gently parachuted to touch down with a rocket drone on the rocky Red Planet.

All Statia schools will be sending their pupils and students to the Planetarium this week and next week for similar trips through the solar system and beyond.

The public can visit the Planetarium at Lynch Plantation on Wednesday and Thursday night. On April 28, 29 and 30 the Planetarium will have a look at Dinosaurs at the time of the Yucatan asteroid impact. Information and reservations can be found on the Facebook page of Jaap Vreeling and Lynch Planetarium.