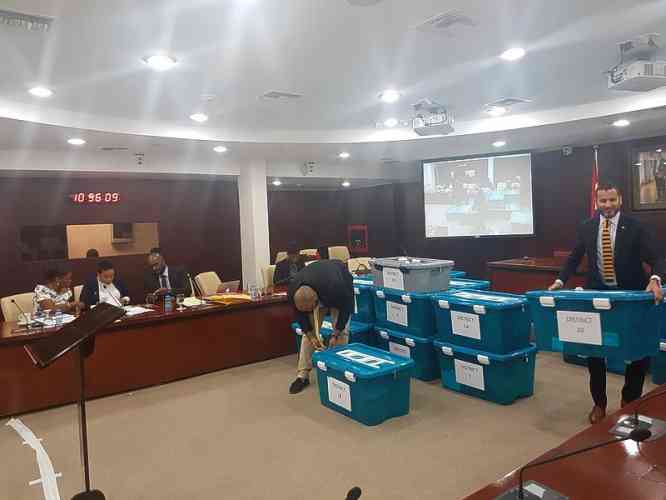 The first station up for the total recount is #18 – the Seventh Day Adventist School in Cole Bay. A total of 551 ballots were cast at that polling station. The locked box holding the ballots were opened by the Bureau in its public sitting in Parliament House to validate the results of the February 26 snap elections.

The Bureau will move on to the other two polling stations – #10 National Institute for Professional Advancement (NIPA) and # 15 Melford Hazel Sports and Recreational Centre – for the total recounts there when each ballots of number 18 are individually checked and counted.

Partial recounts will be held for polling stations #5 – Dutch Quarter Community Centre, #7 Rupert I. Maynard Youth Community Centre, #8 St. Maarten Academy, #14 Belvedere Community Centre and #16 Methodist Agogic Centre. Recounts at these stations will only target a few candidates for whom the tally sheet count and the proces verbaal did not match.

Common errors were two “sticks” on the tally sheet being recorded as the number 11 instead of the number two and the votes for two candidates being inverted.

United Democrats President Stuart Johnson had called for a total recount of all 20 polling stations. The Bureau ruled against his request. Bureau Chairman Jason Rogers said no ground was found for such.

Johnson cited as in his objections, among others, the lighting in polling stations and voters being turned away because they had no voting cards. Rogers said the lighting had no bearing on the voting count and the voting card issue was resolved early in the day.

Total ballots cast at the 20 polling stations tally to 13,954 or 62 per cent of the voting population.

Johnson first made a verbal objection to the Bureau this morning in its sitting to validate the election results. He did so on behalf of the party’s board. However, he was informed the United Democrats board cannot submit an objection as the law only allows for a registered voter to file such. He amended his protest to file it as a voter.

United Democrats candidate current Member of Parliament Perry Geerlings, who missed re-election by two votes, also filed an objection. He said aside from his personal interest in a recount, he was also concerned about the high number of invalid ballots. Those ballots, which include blank ballots, numbered 303.

The invalid ballots this election was higher than 17 months ago when that that number was 196. More voters cast ballots in that election – 14,596.

Rogers told representatives of parties, candidates and other observers gathered for the public hearing that the Bureau had decided following its meeting on Thursday on the total and partial recounts of the eight polling stations.