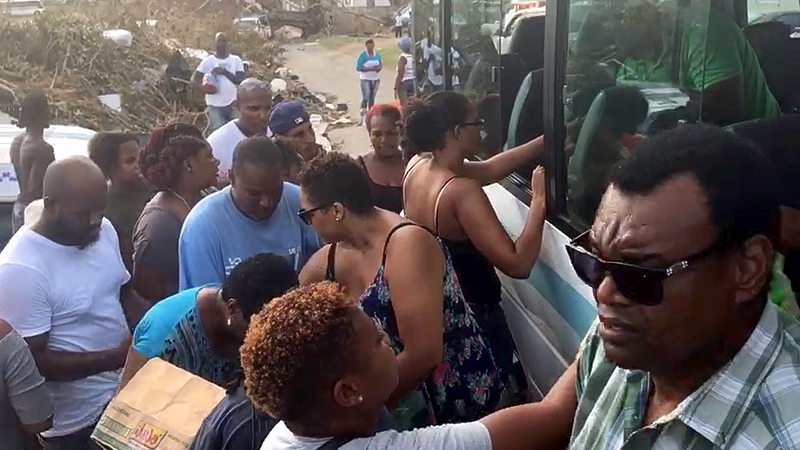 PHILIPSBURG–Tourism and Economy Minister Mellissa Arrindell-Doncher and her cabinet members has swung into action over the past few days to distribute much needed supplies to various districts following the passing and destruction of hurricane Irma.

The Minister along with her Chief of Staff Cecil Nicholas and Director of the St. Maarten Tourist Office Rolando Brison ensured that all the airlines that Ministry TEATT coordinated to come into St. Maarten to evacuate people, were loaded with relief supplies. The distribution started on Wednesday afternoon. Supplies were driven straight from the airport into the security under police protection.

The airlines assisting the effort are Delta Airlines, JetBlue Airlines and PAWA. The airlines organized the collection of humanitarian assistance goods themselves on their end.

“The Minister wanted to ensure that when the flights arrived with supplies for our people. She has been in direct discussion with top management of airlines to ensure that this happens. The effort was further coordinated by Mr. Brison and Mr. Nicholas who are both stuck in the Netherlands but have been performing miracles with relief and evacuation flights,” the Minister’s PR/Executive Assistance Mike Granger explained.

Once on island, the Minister’s Policy Advisor Julian Lake and colleague from the Ministry of Justice Khalil Revan, organized the offloading of the supplies and distribution into the districts. “The call went out to our volunteers, many from the United St. Maarten Party (USP) and others who showed up and was more than willing to assist. Every bit of relief matters at this point and time. The Minister simply wanted to ensure that the airlines with which St. Maarten has a relationship not only assist in moving people out of the country, but brought help for our people,” Granger added.

The Minister expressed her heartfelt thanks to the airlines who not only answered the call, but brought more than expected. The distribution efforts will continue as long as supplies last. No schedule of distribution in districts was given out by the ministry in the press statement.