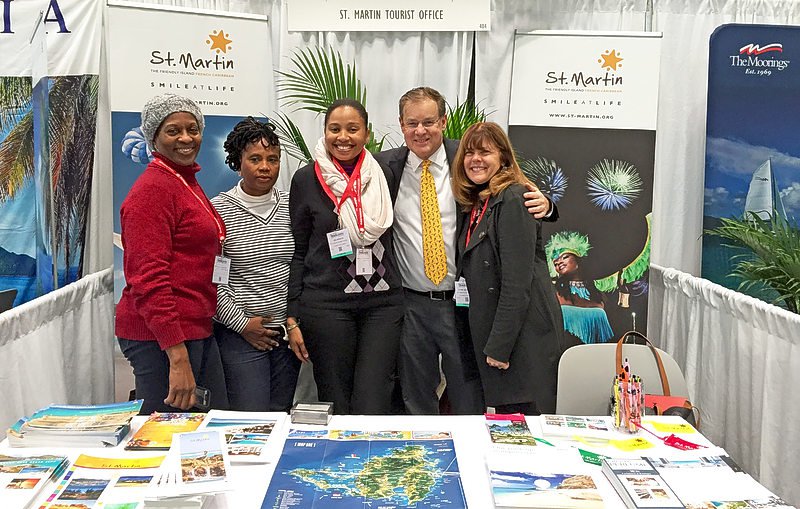 MARIGOT–In 2017, St. Martin Tourism Office decided to multiply its chances of increasing the visibility of the destination at the Travel and Adventure Shows, a series of American travel salons that took place between January and March 2017. It participated in seven of the eight editions of the event this year, in addition to the New York Times Travel Show.

Describing attendance as a “must,” the Tourism Office previously attended just four of the shows in 2016.

“The number of visitors on the island coming from the West Coast is in net progression, therefore this year we added the San Diego [California – Ed.] edition,” explained Suzanne Scantleberry, in charge of promotion in the United States (US) market. “Last December, the participation of the Tourism Office in the Travel Industry Exchange in San Diego confirmed the enthusiasm of this tourism market that we must deal with from now on.”

“This winter, within the framework of the promotion of the destination on the American market, the St. Martin Tourism Office also participated in the New York Times Travel Show on January 27 to 29, 2017, with more than 9,253 travel agents and close to 21,000 consumers attending.

“On January 27, St. Martin along with other islands of the Caribbean and in partnership with the Caribbean Tourism Organisation (CTO) held a training session for the agents under the theme “Family Travel or Multi-Generational Travel.”

“In opting for dates at the beginning of the year, the 2017 edition of the Travel and Adventure shows were more favourable to “sunny” destinations, especially thanks to the Washington salon, the most important along with that of Los Angeles, California and Chicago, Illinois which attracted 10,000 visitors coming from the American capital, from Virginia and from Maryland.

Tourism Office representative in the US, Cyndi Miller Aird, guaranteed the promotion of the destination:

“Meeting hundreds of potential consumers in the heart of winter is a real way to boost the number of visitors in the tourism high season,” she said. “Some visitors had already booked their trip and came to get information on what to do during their holiday. Others had to be convinced by the St. Martin representatives.

“People wanted to go to the Caribbean but still didn’t know where” Scantleberry added. “As for the notoriety of the island, there is at least one thing that potential American tourists know already; it’s the island where they can see airplanes land from a beach.”