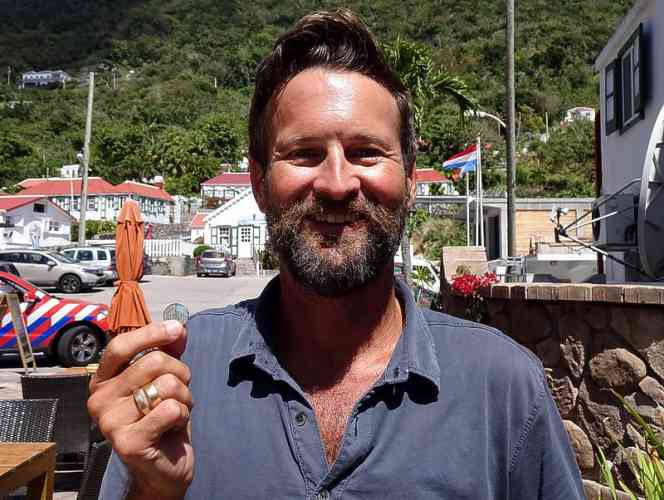 SABA–An American tourist visiting Saba last week, discovered a 337-year-old coin, the oldest that was ever found on Saba. The tourist, Craig Harrison who lives in Puerto Rico, found the coin on a trail and submitted the artefact to the Saba Archaeological Center Sabarc.

Harrison (45) was walking on the All Too Far trail last week Thursday, as part of a larger hike that also included Mount Scenery and the Elfin Forest trail. When he slowed down to take in the beautiful scenery, keeping an eye on his feet because of the loose rocks, he saw the coin lying in the middle of the path. “I picked it up and wiped it off. It was then that I saw the date 1682.”

He got in touch with Councilman Vito Charles who sits on the Sabarc board and made sure that he got the coin before leaving Saba on Saturday.

Sabarc Director Ryan Espersen confirmed that the coin is the oldest one ever to be found on Saba. The coin is from Schleswig, which during 1682 was part of Denmark.

Espersen said that given the early connections of the Dutch colonists with the islands of St. Maarten, St. Eustatius and Saba as well as the Virgin Islands, and the practice of using multiple currencies on the islands, he did not find it too surprising that a Danish coin from 1682 was found on Saba.

“How it got there is speculation, but trails like the All Too Far have been in use on Saba since the early colonial period. So far, it’s the oldest coin found on the island; the second oldest was a Dutch West Indies coin from 1713 that I found at Spring Bay Flat,” Espersen said.

Espersen explained that one of the characteristics of small Caribbean islands up to the 19th century was that many different currencies were used instead of just one, since money was usually scarce.

On Saba by the 1850s, at least six different currencies were used: Dutch guilders, Spanish pieces of eight, the Portuguese Johannes, US dollars, Danish West Indies dalers/rixdalers, and the French Guiana livres. “These other currencies were needed since the total amount of Dutch guilders circulating on Saba by 1854 was only enough to buy two or three average houses.”

Craig Harrison, the tourist who found the old coin, said he thoroughly enjoyed his four-day stay Saba, the island is “absolutely beautiful nature, the great hikes and the very friendly people.” He promised to return to Saba, to hopefully see the display of the coin that he found and to bring someone to share the island with.