Home Local News Trade deficits down in Saba, Statia, going up on Bonaire 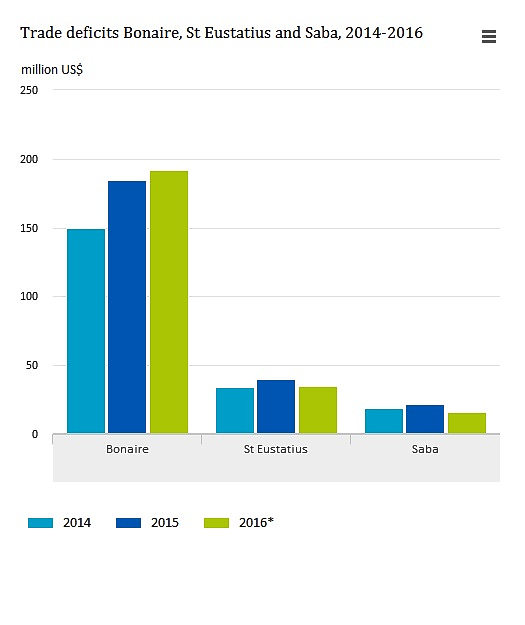 SABA/ST. EUSTATIUS–Bonaire’s trade deficit has increased for the second consecutive year in 2016, whereas the trade deficits of St. Eustatius and Saba declined compared with 2015, Central Bureau for Statistics (CBS) reported on Tuesday.

Since the first measurements were carried out in 2011, imports on Bonaire, Statia and Saba have exceeded exports. Production is relatively low on the islands in comparison to the European Netherlands, which leads to a structural trade deficit in the Caribbean Netherlands, CBS said.

Trade deficits on Statia and Saba amounted to US $35 million and $16 million, respectively. The value of goods imported on Statia declined by nearly 11 per cent and on Saba by more than 27 per cent. The export value of goods of both islands increased in 2016, resulting in smaller trade deficits than in 2015.

Bonaire’s trade deficit amounted to $192 million last year, which is four per cent up from 2015. Imports of goods increased by 3.5 per cent to just over $200 million compared to the previous year. With nearly $9 million, the value of goods exported from Bonaire was more than eight per cent lower than in 2015.

Bonaire imported manufactured goods against a value of $5.5 million last year, which is 20 per cent more than in 2015, and the most substantial increase of all goods categories.

The import values of manufactured goods, machinery and transport equipment increased by $3 million each. Imports of these goods fell to a low in 2014, but have increased since then.