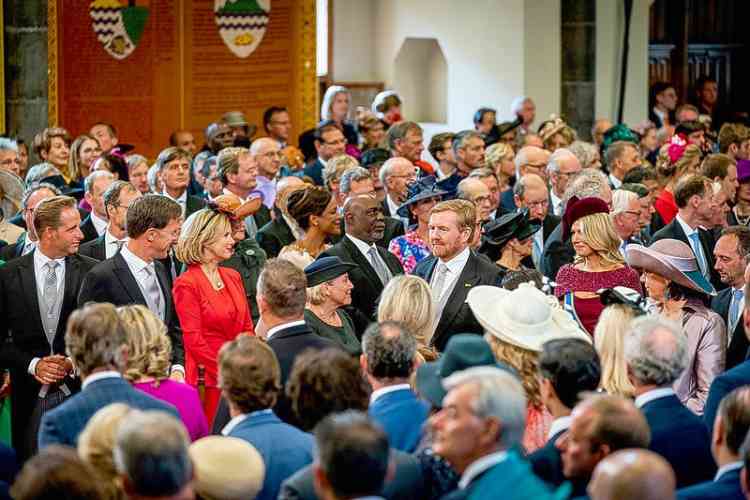 ~ In his seventh Speech from the Throne ~

THE HAGUE–Trade wars and the threat of Brexit were acting as a “profit warning” for the Dutch economy, and the government intends to increase investments to protect its future, Dutch King Willem-Alexander told Parliament on Tuesday, in a Budget Day address prepared by the coalition government.

The address came as Prime Minister Mark Rutte’s government released details of its 2020 budget, which featured spending increases on healthcare and housing. The government also confirmed its plans to create a national investment fund next year to take advantage of its ability to borrow at negative rates.

“The approaching Brexit casts its shadow forward,” the monarch said in his annual speech. “It’s a profit warning for the short term and the long term, that forces us to consider how the Netherlands will earn money in the future and remain a country with good social services.”

The Dutch government estimates it will lose 1.2 per cent of Gross Domestic Product (GDP) by 2030 if Britain, a key trading partner, leaves the European Union (EU).

Dutch GDP growth is forecast to slow to 1.8 per cent this year and 1.5 per cent in 2020, according to forecasts by the Bureau for Economic Policy Analysis CPB.

The government also confirmed plans to keep the corporate tax at 25 per cent in 2020 and lower it to 21.7 per cent in 2021. It also said it would reduce some tax deductions that have allowed multinationals such as Royal Dutch Shell and Philips to cut their Dutch corporate tax bill to zero.

The moves to increase spending are modest: the country will still run an estimated surplus of about 0.3 per cent of GDP, down from a 1.2 per cent surplus this year. This comes a week after European Central Bank President Mario Draghi urged Germany and the Netherlands to spend more to avert a downturn in the euro zone.

“Also, in the Caribbean Netherlands we will improve the purchasing power and infrastructure and strengthen governance,” the King said referring to Bonaire, St. Eustatius and Saba in his annual speech with the Governors and Ministers Plenipotentiary of Aruba, Curaçao and St. Maarten among the audience.

King Willem-Alexander said the Dutch government had a “growth agenda” and would present a draft plan next year for the national investment fund, which would target education and infrastructure.

“National debt is under control and the [tax – Ed.] burden can be lowered,” he said in his address to both houses of Parliament gathered in the 13th-century Hall of Knights in The Hague.

After years of austerity following the global financial crisis, the Dutch government is forecast to have a national debt of just 47.6 per cent of GDP in 2020, well below European budget requirements.

In his Speech from the Throne, King Willem-Alexander also referred to the situation in Venezuela and its consequences for Curaçao and Aruba.

“Due to the political and humanitarian crisis in Venezuela, the Caribbean part of the Kingdom is also confronted with the threat of large-scale migration and the economic consequences thereof. There is practical help and assistance available from the Netherlands,” he said.

The ending of World War II was a common theme throughout the King’s speech. “Of course, as we start to celebrate 75 years since our liberation, we are all the more aware of the degree to which prosperity and well-being in the Netherlands depend on what happens in the rest of the world,” the King said.

Those who look at developments elsewhere in the world, will realise how special it is to live in a country where people feel safe, the King continued.

He also mentioned the “old and cherished partnerships” with the United States and the United Kingdom which, he said, are being redefined. “Global free trade is under threat from protectionism and trade conflicts. The Netherlands and Europe must respond with self-assurance and realism.”

While transatlantic cooperation and the EU are the cornerstones of Dutch foreign policy “many aspects of the post-war multilateral system are in urgent need of modernisation,” the King said. “Examples include international protection of intellectual copyright, cybersecurity and the effectiveness of decision-making at the UN and the World Trade Organisation.”

Key to the Dutch position, he said, are security, a strong and sustainable European economy, a common climate policy, respect for the rule of law, and last but not least, an effective policy on migration.

“It is true that the number of migrants coming to Europe has fallen dramatically compared with 2015. But the sustained pressure on Europe’s external border, the appalling fate of many migrants who try to cross the Mediterranean and the lack of solidarity among EU member states all require that we take new steps. Every country must do its part.”

The King ended with a reference to a 96-year-old member of the resistance who, the King said, had stated recently that “I feel a responsibility to pass the message to younger generations that you must engage in resistance if necessary.”

“As a young man this hero put his life on the line for the future of our nation,” the King said. “And now, 75 years later, the future is still what drives him. That is not only inspiring – it is a task we all share.”