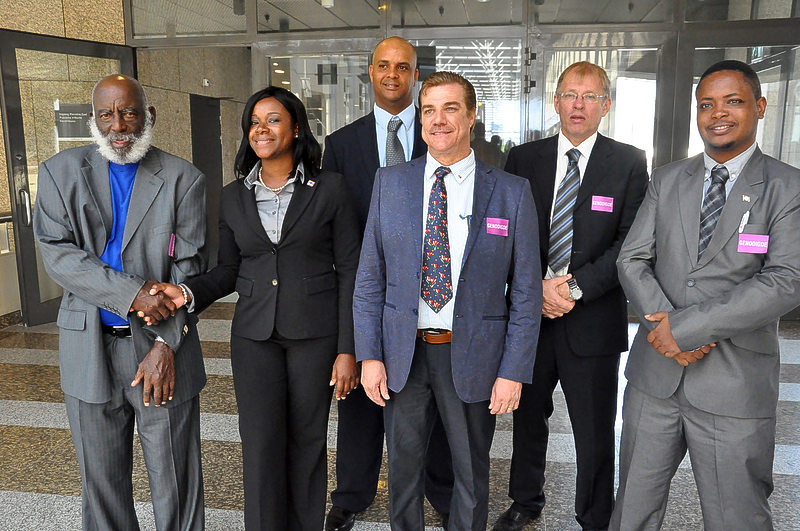 THE HAGUE–Negotiations will start soon to discuss the transfer of tasks from the Dutch Government to the Public Entity Saba. Dutch Minister of Home Affairs and Kingdom Relations Ronald Plasterk made that pledge during a debate in the Second Chamber of the Dutch Parliament on Monday.

The commitment came after Members of the Second Chamber André Bosman of the liberal democratic VVD party, Roelof van Laar of the Labour Party PvdA and Ronald van Raak of the Socialist Party (SP) during a debate about the Caribbean Netherlands constitutional evaluation repeatedly requested the Minister to transfer tasks to the Caribbean Netherlands islands wherever that was possible.

Saba was used as an example. The Members of Parliament (MPs) pointed out that Saba had things financially in order, and that its Government was stable as well, while Bonaire and St. Eustatius were lagging behind in this process.

“How can we reward Saba? Why can’t Saba do more on its own? We need more tailor-made solutions,” said Van Laar, who called on the Minister to engage in talks with Saba. Van Laar also requested that Plasterk consider the possibility of looking at the interest-free loans which Saba has asked to either annul or to extend the span of repayment. “Can’t Saba get some more breathing space?”

“The islands should be able to take more of their own decisions. The Executive Council and Island Council are the best forums that can take these decisions,” said Bosman, who immediately added that this should only become an option when the governments had their financial and administrative households in order.

“The VVD is a proponent of assigning more of the executive authority to these islands. For Saba this could already be the case. Bonaire is on the right path, although the change of Government hasn’t been an advantage to administrative stability. St. Eustatius is too far behind in financial and administrative developments to even think about creating room for their own policy,” said Bosman who suggested a pilot project with Saba as a tryout. “In my times as a fighter pilot we would say, ‘No guts, no glory.’”

Bosman challenged Plasterk to let go of some of the control by The Hague. “Why should The Hague keep itself busy with choices on the future of an island with 1,800 residents? Wouldn’t they be able to do that better themselves? What reasons are there to keep the islands so close?” Bosman asked.

Van Raak asked the Minister to move away from the current policy whereby the ministries in The Hague decide on the bulk of matters regarding the islands. “I am making a plea today to turn things around. Let the islands perform their own tasks where this is possible. Give them the tasks and assist them where necessary,” he said.

“It is too crazy for words that Saba cannot issue its own fishing permits or work permits. Saba is much more ahead than the other islands. Allow them to do more for themselves,” said Van Raak. He requested that Plasterk initiate talks with Saba and with the other two islands, and report back to the Parliament. Bosman requested the same.

Plasterk said that in his opinion that it would seem “unwise” to just forward the finances to the islands, a combined budget of 367 million euros for this year, triple the amount that was spent on the islands in 2010, and allow them to spend it to their liking.

“That is not what I meant,” Van Raak immediately countered. “The different reports state that in some areas, the islands should be allowed more freedom. Let’s take that as a point of departure. Let the islands handle some of their own affairs and where that is not possible, we should assist them.”

Plasterk agreed on that point. “If it can be done there, there is no reason not to do that.”

Van Laar proceeded to mention the fishery permits in Saba. “That is one sad example. But apparently for some reason Saba hasn’t been allowed to take charge of this matter. We have to push on and make it a reality,” said Van Laar.

Plasterk then informed the Second Chamber that the transfer of tasks to Saba was on the agenda of the next so-called Caribbean Netherlands Table, a regular consultation among the Dutch ministries with the Island Governments. He said that he would look into the matter of Saba’s interest-free loan. “I will get back on that with the handling of the 2017 budget.”

Referring to the constitutional status of the three islands as public entities, Plasterk said there was no question of making drastic adaptations to the Caribbean Netherlands structure. “That doesn’t mean that the structure is functioning optimally,” he said, adding that some aspects were doing very well, especially in the field of education and healthcare.

The transferring of tasks is exactly what Saba has been requesting all along. The Executive Council has requested it numerous times in talks with The Hague and Saba’s Island Council mentioned this too in a letter that was discussed in a closed-door session with the Second Chamber’s Permanent Committee for Kingdom Relations on Monday prior to the debate with Plasterk.

“Saba is ready to take over a number of tasks that are carried out by the Dutch Government,” the Island Council stated in the letter. However, the budget should follow the tasks, conform to the financial law FINBES.

The Island Council found it “disappointing” that the transfer of tasks was nowhere to be found in the formal reaction of the Dutch Government to the constitutional evaluation report of the Spies Committee. Locally executing tasks is much more effective and efficient, emphasised the Island Council.

The Island Council also stated that it was “proud” of the “stable and trustworthy administrative culture” on the island. “That is why Saba can manifest itself as a dependable and responsible partner. The financial management shows virtue, which has resulted in several approved accountant’s statements, a unique situation in the Caribbean Netherlands and the Caribbean region,” it said.

“Our current constitutional structure was our best option. The public entity status gave us flexibility. It is time that the Ministries also realise that some things are better taken care of on a local level. We are only asking for more flexibility. We have done a lot, showed ourselves as a reliable partner. Now it is time to give back within the existing preconditions,” he told The Daily Herald after the debate.

According to Buncamper, Saba has shown that it takes its responsibilities very seriously. He emphasised that the budget has to follow the tasks when they are transferred. He said the annulling or extension of the interest-free loan would be a good start, as it would create more space on Saba’s budget for Government to invest. “We are looking forward to the negotiations,” he said about the next Caribbean Netherlands Table talks. “For too long they have talked about us, not with us.”

Councilman Ishmael Levenstone of the Saba Labour Party (SLP) said he had high hopes. “I see light at the end of the tunnel. Finally the fishing licences will come back to Saba. We have been clamouring for this for a long time.”