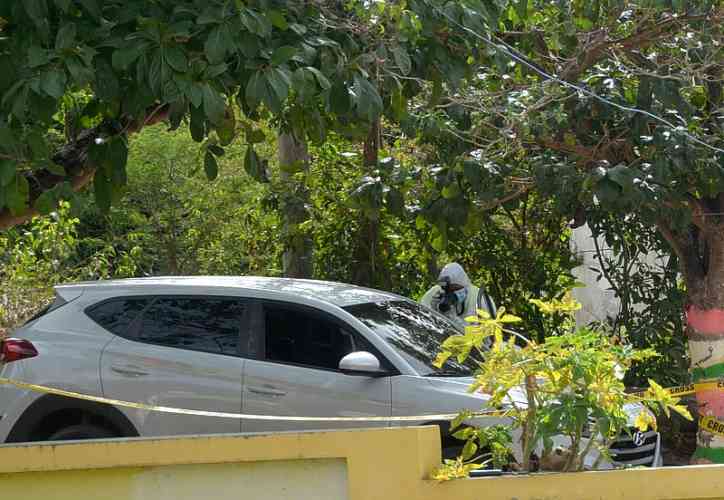 A forensic investigator taking photographs of the vehicle in which the lifeless body of Juancho Raymond Cannegieter was found on August 8, 2018. (File photo)

PHILIPSBURG–The Court of First Instance will be hearing the case of R.E. (26) on June 5, the Judge decided Wednesday. The Prosecutor’s Office is holding the suspect responsible for having gunned down Juancho Raymond Cannegieter (39) in a yard near his home on Marigot Hill Road on August 8, 2018.

The police found Cannegieter lifeless in his vehicle, with multiple gunshot wounds. R.E. became a suspect after he was found in the possession of the victim’s phone shortly after the shooting, the Prosecutor said Wednesday. The Prosecutor’s Office will be charging him with murder/manslaughter and with the possession of an illegal firearm.

The case was not handled on Wednesday because the results of DNA investigations by the Netherlands Forensic Institute (NFI) are still to be forthcoming. In the meantime, the Prosecutor advised against the lifting or suspension of R.E.’s pre-trial detention.

Attorney-at-law Safira Ibrahim filed requests with the Court to lift or to suspend her client’s preliminary detention. She claimed there were insufficient grounds to keep her client in detention, as he had “vehemently” denied any involvement with the shooting during a large number of interrogations. The lawyer also claimed there was insufficient evidence of her client’s involvement with murder or manslaughter in the case file.

Ibrahim said her client’s health had “drastically” deteriorated during his detention at the Pointe Blanche prison. She claimed her client required medical attention which could not be provided at the prison’s infirmary.

According to the Prosecutor, the suspect’s denials should be taken with a grain of salt, as he had been lying frequently. Three days after the shooting R.E. was apprehended after he was found in the possession of the deceased’s mobile phone. He initially was arrested for fencing, but from a secretly recorded telephone conversation his alleged involvement with murder and manslaughter had emerged, the Prosecutor stated.

The Judge turned down the request to lift the suspect’s detention as there were sufficient grounds to keep him behind bars. Where R.E.’s suitability for detention was concerned, the Judge said he would be putting a decision on the request to suspend his pre-trial detention on hold until a doctor’s report on the defendant’s health status has been received.