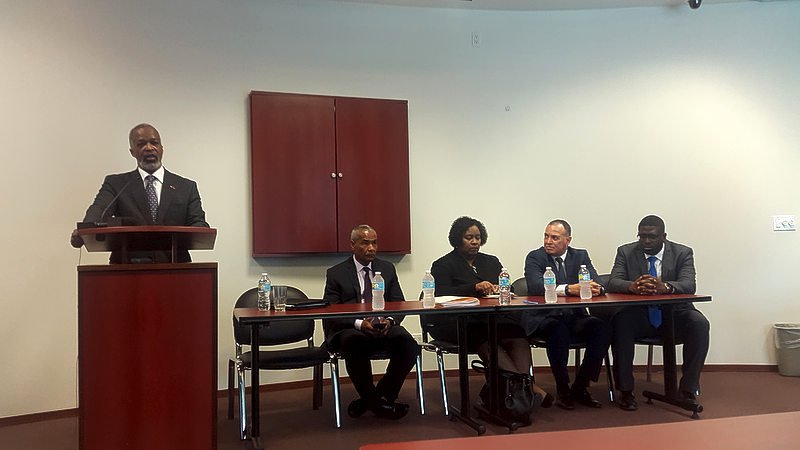 PHILIPSBURG–“Our record is good … we have proven we are serious about our supervision,” said Central Bank of Curaçao and St. Maarten (CBCS) President Emsley Tromp on Tuesday.

Tromp said at a press conference on St. Maarten the Central Bank has never had a bank or pension fund failed under his tenure. “We have been doing a good job. … The financial crisis did not have consequences here,” he said.
He pointed out that no supervision is perfect. “Supervision where there is no problem is an illusion.” This statement is proven by the 2008 global financial crisis where even banks in the Netherlands faced challenges.
In spite of that global crisis, there was not “any bank crisis” on St. Maarten or Curaçao. “The same holds true today where neither country in the financial union has been faced with a bank or pension issue,” he said. For more than 30 years, the Central Bank has had an “impeccable record,” Tromp said.
The Central Bank, being very conscious about the impact of the financial crisis, fostered the formation of the “supervisory college” of central banks within the Dutch Kingdom. Tromp said this institution is a vehicle by which the central banks could learn from each other’s experience.
Tromp came out strong against what he described as efforts to undermine confidence in the Central Bank via a series of press articles published in the Netherlands and Curaçao in the past days.
Tromp said the “baseless allegations” about his personal finances levelled against him have come about after the Central Bank intervened into the Giro Bank in Curaçao after that commercial financial institution was found not to be complying with Central Bank regulations.
The motive behind the personal attacks was “to damage my reputation” with the aim of “undermining the bank,” said Tromp.
One example of that attempt to undermine the Central Bank is the claim that the loans to Port St. Maarten for the construction of the Simpson Bay Causeway and to Aqualectra in Curaçao should be labelled doubtful. Tromp said both loans are “performing” and the borrowers are living up to their expectations.
The Central Bank and its external auditor have found “no reason” to classify the two loans as doubtful. Therefore, the claim “does not have a basis,” said Tromp.
The bank head also outlined at the press conference the accusations levied against him and put forward his response to these as proof that they are baseless.
The complaint about accusations levied against Tromp and the Central Bank will be filed with the Prosecutor’s Office. Tromp said the report may be filed both in the Dutch Caribbean and in the Netherlands depending on the advice of the attorney handling the case.
Tromp has asked the Curaçao Parliament for an audience on several occasions, dating back to 2011, to give his response to accusations. Meetings were called, but have been postponed several times.
In St. Maarten, Members of Parliament (MPs) Frans Richardson, Maurice Lake and Silvio Matser have requested an urgent meeting of Parliament with Tromp to learn directly about the state of affairs of the Central Bank, especially as it relates to insurance company ENNIA.