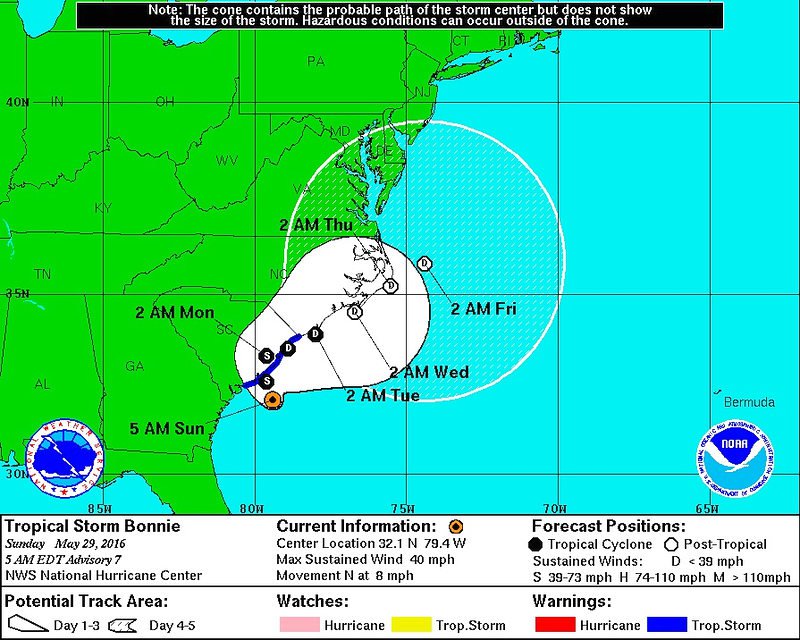 …BONNIE WEAKENS TO A TROPICAL DEPRESSION NEAR THE COAST…

AND PORTIONS OF THE CAROLINAS…

CHANGES WITH THIS ADVISORY:

All Tropical Storm Warnings have been discontinued.

There are no coastal watches or warnings in effect.

At 800 AM EDT (1200 UTC), the center of Tropical Depression Bonniewas located near latitude 32.7 North, longitude 79.6 West. Bonnie is moving toward the north near 9 mph (15 km/h), and this general motion is expected to continue today. On the forecast track, the center of Bonnie is expected to move onshore near the south-central coast of South Carolina this morning. A slow northeastward motion near the coast of northeastern South Carolina is expected by tonight and on Monday.

Data from an Air Force reconnaissance aircraft indicate that the maximum sustained winds have decreased to near 35 mph (55 km/h) with higher gusts. Little change in strength is forecast during the next 24 hours, followed by slow weakening on Monday.

RAINFALL: Bonnie is expected to produce total rainfall accumulations of 2 to 4 inches with isolated maximum amounts of 6 inches from central and eastern South Carolina to the Georgia border, and 1 to 3 inches farther north across southeastern North Carolina. Heavy rain is expected to develop well north of Bonnie’s main circulation into parts of the Mid-Atlantic region and the Northeast with total accumulations of 1 to 2 inches through Monday and isolated maximum amounts of 4 inches.

WIND: Wind gusts to near tropical-storm force are possible along the south-central coast of South Carolina today.

STORM SURGE: Storm surge inundation of 1 to 2 feet above ground level is possible along portions of the south-central coast of South Carolina today.

SURF: Bonnie is expected to produce dangerous surf and rip current conditions along portions of the southeastern United States coast through the weekend._