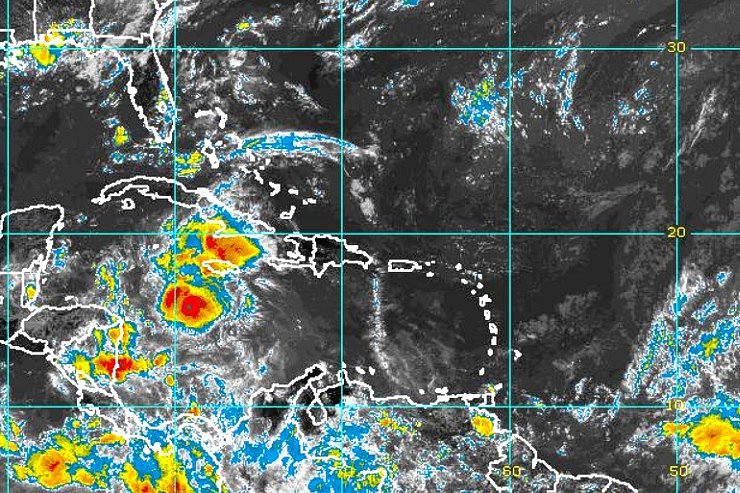 And it’s expected to continue dumping heavy rains on Jamaica – up to four inches – before heading towards Belize today.

The NHC said at noon yesterday that the centre of Earl was located about 215 miles south southeast of Grand Cayman and 535 miles east of Belize City. It was carrying maximum sustained winds of 45 miles per hour.

It’s moving towards the west near 22 miles per hour and that motion is expected to continue, with a decrease in forward speed, for the next couple of days.

A Hurricane Watch is in effect for the East coast of the Yucatan peninsula from Punta Allen, Mexico, southward to the Belize/Guatemala border.

Total rain accumulations of 8 to 12 inches are expected over portions of Belize, Honduras, Guatemala, and the Yucatan peninsula of Mexico, with possible isolated maximum amounts of 16 inches in Mexico and Belize. Those rains could result in life-threatening flash floods and mud slides.

When it was just a tropical wave on Sunday, the system caused power lines to topple, which started a fire that killed six passengers on a bus filled with people returning from a beach excursion.

According to the Associated Press, conditions from the system may have also caused a tour boat to overturn near the Samana Peninsula. The bodies of three people were recovered and four other people are missing.

Earl is the fifth tropical storm of the 2016 Atlantic Hurricane Season, and the first since late June. ~ Caribbean360 ~