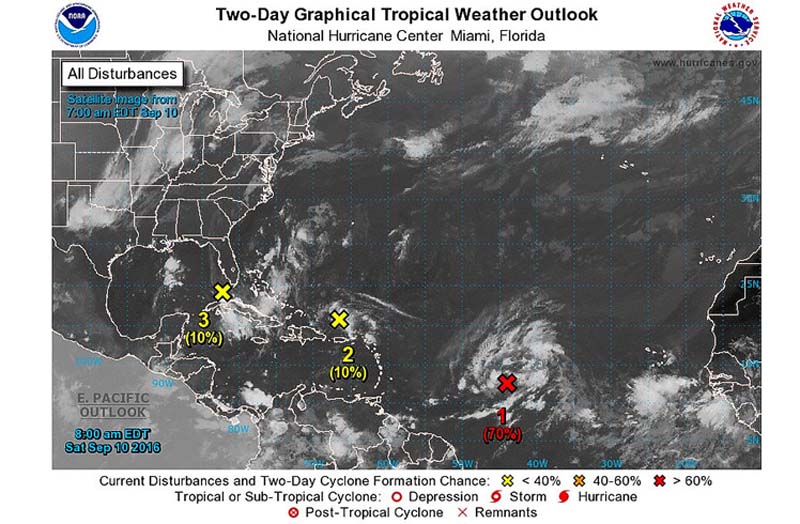 1. A broad area of low pressure is located a little more than 1000
miles east of the Lesser Antilles. Although the shower activity
associated with the system has not become any better organized
since yesterday, conditions are favorable for a tropical depression
to form by early next week while this disturbance moves toward the
west-northwest and then toward the northwest over the central
Atlantic during the next several days.
* Formation chance through 48 hours…high…70 percent
* Formation chance through 5 days…high…90 percent

2. An area of cloudiness and thunderstorms located north of Puerto Rico
and Hispaniola remains disorganized. Environmental conditions are
not expected to be conducive for significant development of this
system while it moves generally west-northwestward at around 15 mph.
* Formation chance through 48 hours…low…10 percent
* Formation chance through 5 days…low…10 percent

3. Satellite and radar data indicate that the weak area of low pressure
located over the extreme southeastern Gulf of Mexico is producing
limited shower activity. Upper-level winds are not favorable for
development, and the low is forecast to weaken while it moves
westward at 5 to 10 mph.
* Formation chance through 48 hours…low…10 percent
* Formation chance through 5 days…low…10 percent