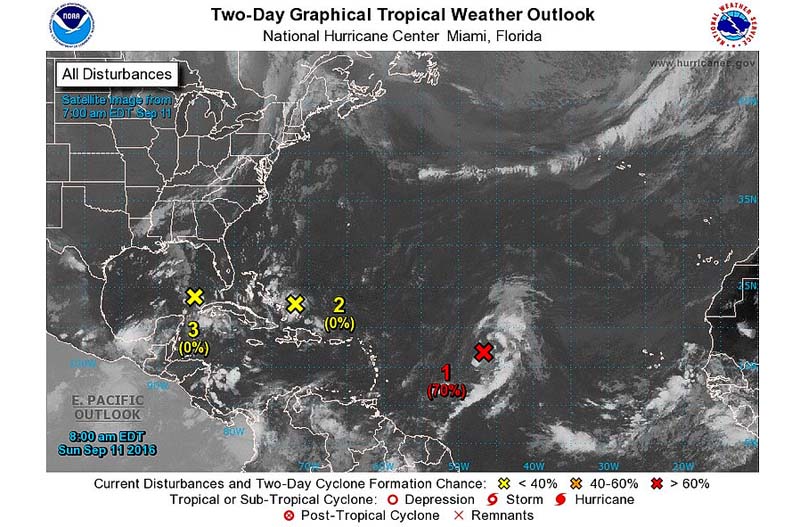 1. A low pressure system located about 1000 miles east of the Leeward
Islands is producing a large area of cloudiness and showers, but
it currently has limited thunderstorm activity near the center of
circulation. However, a tropical depression is still likely to
form later today or on Monday before upper-level winds become less
conducive for development. The low is expected to move
northwestward or north-northwestward at 10 to 15 mph over the
central Atlantic Ocean during the next few days.
* Formation chance through 48 hours…high…70 percent
* Formation chance through 5 days…high…80 percent

2. Showers and thunderstorms have increased with a disturbance located
near the southeastern Bahamas. However, there are still no signs of
a surface circulation, and conditions do not appear conducive for
significant development of this disturbance while it moves west-
northwestward at 10 to 15 mph. Heavy rainfall is possible over
portions of the Bahamas today and on Monday.
* Formation chance through 48 hours…low…near 0 percent
* Formation chance through 5 days…low…near 0 percent

3. A few showers and thunderstorms have re-formed near a weak area of
low pressure located over southeastern Gulf of Mexico. However,
upper-level winds will not be conducive for development of this
system while it moves generally westward across the Gulf of Mexico
during the next few days at 5 to 10 mph.
* Formation chance through 48 hours…low…near 0 percent
* Formation chance through 5 days…low…near 0 percent