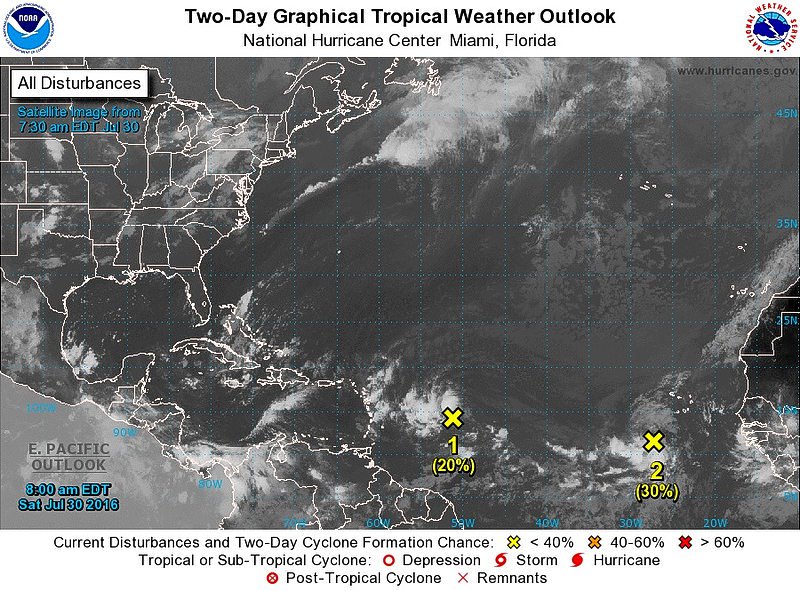 1. A tropical wave located about 700 miles east of the Lesser Antilles
is moving westward at 25 to 30 mph. While the associated shower
activity has increased since yesterday, any additional development
should be slow to occur due to the rapid motion of the system.
Regardless of development, this system will likely bring showers and
gusty winds to portions of the Leeward Islands, Virgin Islands,
Puerto Rico, and the eastern Caribbean Sea beginning later today.
By the middle of next week, the disturbance is expected to be in the
western Caribbean Sea, where conditions could become more conducive
for development.
* Formation chance through 48 hours…low…20 percent
* Formation chance through 5 days…medium…40 percent

2. Shower and thunderstorm activity associated with a tropical wave
and a low pressure system centered a couple of hundred miles
southwest of Cabo Verde has become less organized during the past
24 hours. However, there is still a chance for some development
during the next day or two before the disturbance encounters a less
favorable environment over the central tropical Atlantic.
* Formation chance through 48 hours…low…30 percent
* Formation chance through 5 days…medium…40 percent