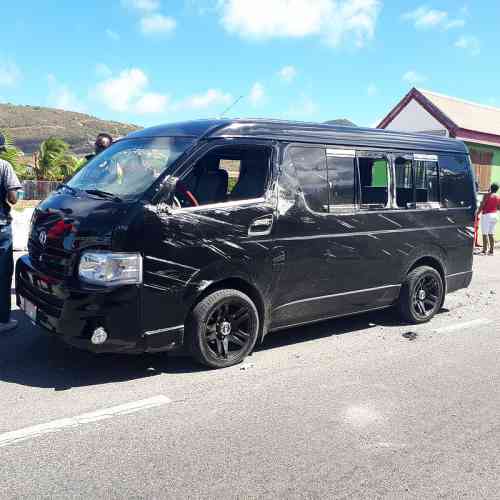 The damaged passenger bus on Monday.

PHILIPSBURG–Police officers called on the community to assist them with locating a white truck that was involved in a hit and run incident on Monday, March 11, in the vicinity of the Belvedere/ French Quarter boarder.

Reports received from the Traffic Department stated that bus #160 was travelling on the Illidge Road heading in the direction of French Quarter when a white truck carrying concrete blocks, travelling in the opposite direction began to lose its cargo.

The concrete blocks, which were not properly secured, fell from the truck and damaged the bus. One of the cinder blocks barely missed the driver when it entered the chauffeur’s side window and landed on the operator’s seat. The operator of the white truck continued driving without stopping to access the damages, leaving behind several concrete blocks on the roadside.

The police Traffic Department is asking the driver of the white truck to report to the station, or persons who were in the vicinity at the time of the accident to get in contact with Traffic Department as soon as possible by calling 542-2222 extension 241 or the Emergency Dispatch by dialling 911.