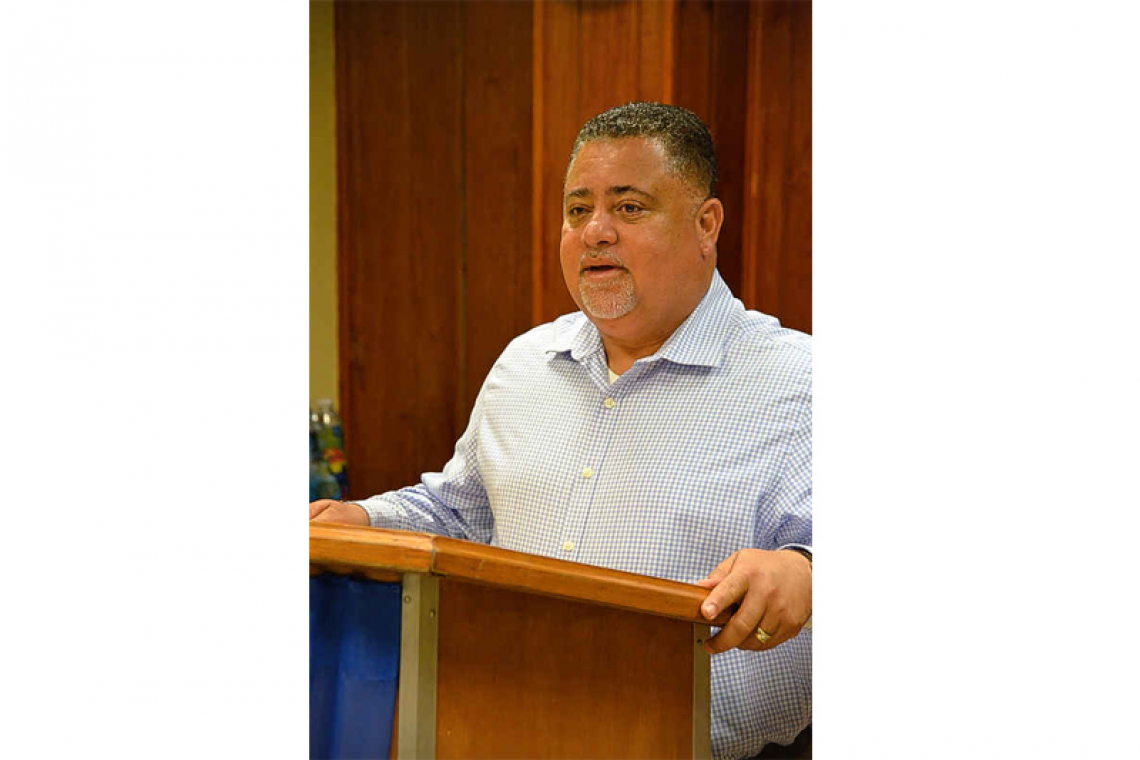 PHILIPSBURG–Former Member of Parliament (MP) Frans Richardson was sentenced in the Court of First Instance on Tuesday to twelve months and payment of criminal proceeds of NAf. 666,000 and NAf. 192,690. He was also banned from running for public office for three years.

The Prosecutor’s Office demanded a prison sentence of two years and a four-year ban on running for public office for Richardson in the “Aquamarine II” case. The prosecutor also sought the confiscation of criminal proceedings to the tune of US $113,105.56 during the hearing of this case, which took place September 30 and October 1, 2021.

In addition, the confiscation of criminal proceeds worth $370,000 was also sought in the “Emerald” case in which Richardson was found guilty of accepting bribes, money-laundering and tax fraud.

In Aquamarine II, Richardson was found guilty of having requested substantial sums of money from construction company Taliesin, or its contractor and owner of Low Price Lumber Hardware store, for repairs of storm damage to the “LEA-building” in which government-owned agency Bureau Telecommunication and Post (BTP) is located. This concerns repair of damage caused by Hurricane Irma.

In return for the money, Richardson used his influence as a politician to ensure that Taliesin would be awarded contracts for maintenance and repair work for BTP and to expedite payment of existing contracts with BTP.

In addition, he abused his political functions as a member of the parliamentary committee of Tourism, Economic Affairs, Transport and Telecommunication (TEATT) and the Committee of Finance to gain personal benefit.

Also, Richardson participated in a contract between Advanced Communications and Technology Services NV (ACTIS) and BTP, which was closed March 16, 2012. ACTIS became the managing company of the numbering plan for St. Maarten as per June 15, 2012.

Richardson, through his shareholding in Caribbean Value Estate Ltd. (CVE) and CVE’s shareholding in ACTIS, had a financial interest in the contract between BTP and ACTIS, under which BTP made payments to ACTIS, the court stated, adding that Richardson had received dividends from ACTIS.

As an MP and member of the parliamentary committee for TEATT, Richardson was also a supervisor of BTP. He supervised the contracts closed by BTP with third parties, including ACTIS, and the financial consequences thereof, the court stated.

“The suspect acted in two different capacities, which he also tried to hide,” the judge said in the verdict. The court concluded from the “rather cumbersome” manner of dividend payments that Richardson had tried to “camouflage” his (financial) involvement through CVE with ACTIS.

As Richardson failed to give a plausible reason for this conduct, the court assumed he has done so to avoid accusations of conflicts of interest. Having a financial interest in ACTIS, while on the other hand he had to supervise, among other things, the contract between BTP and ACTIS, damaged the impartiality and integrity of public administration and put the government at risk where quality and reliable performance were concerned.

The court found the former MP guilty of receiving bribes. Richardson had, partly under the guise of donations to his United St. Maarten (US) party, forced a businessman to pay him large sums of money. In this way, the paying party hoped to gain a preferential position in the awarding of government contracts and to effect timely payment and/or continuation of existing contracts.

“As a result, the suspect abused his position as a representative of the people to serve his own financial interests, rather than the interests of the citizens of St. Maarten,” the court said.

The proven facts are serious. “These damage the trust the people of St. Maarten should be able to have in people in important positions, especially politicians and elected representatives.”

Richardson was also “severely” blamed for the conflict of interest in his relationship with BTP and ACTIS, while he was an MP. “By acting in this way, the accused has harmed the prestige of his office and has betrayed the trust placed in him as an MP,” the court said.

In determining the sentence, the court considered the fact that Richardson was sentenced to 36 months for a similar offence on January 29, 2020. However, this judgment is not yet irrevocable.

During his trial, Richardson fervently denied that he was guilty of any crimes. This shows that he does not see the punishable and objectionable nature of his actions. “On the contrary, the suspect feels he is wronged because he – in his view as the only one – has to stand trial for this,” the court said.