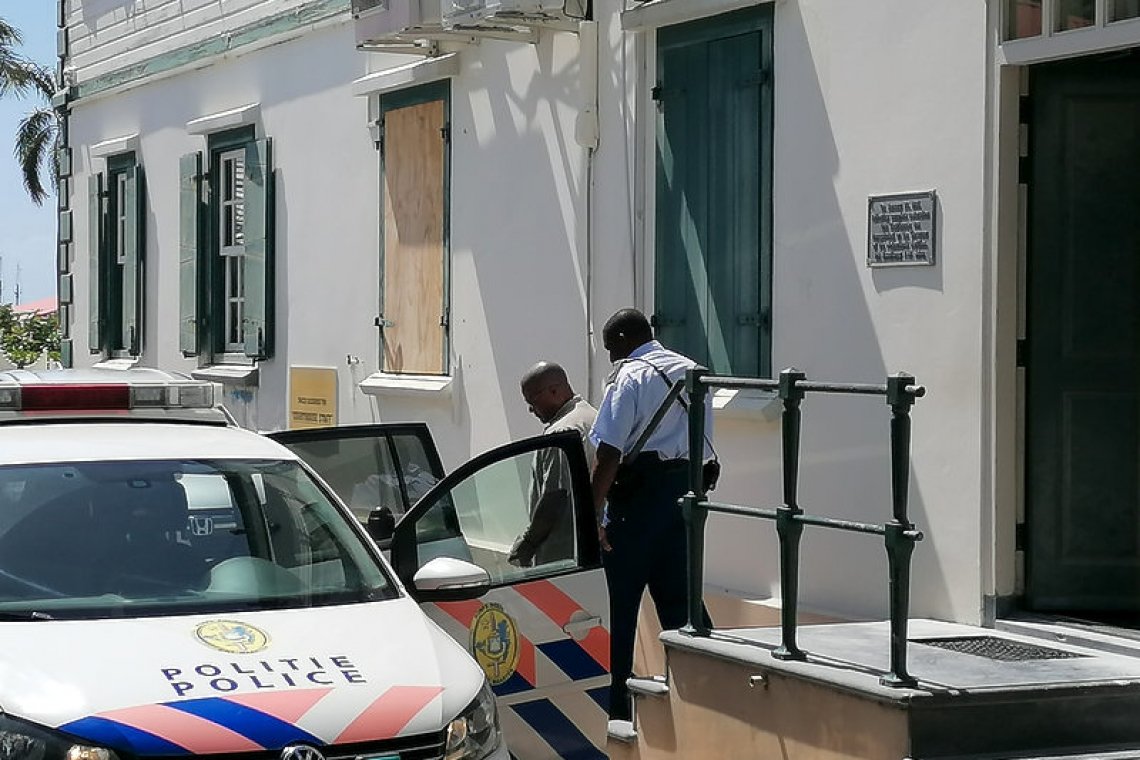 PHILIPSBURG–The suspect who allegedly left one man dead and another injured in a broad-daylight shooting in the vicinity of Clean St. Maarten and telecommunications company TelEm on Pond Island on October 3, 2019, may be sent to prison for twenty years. The prosecutor said during Tuesday’s Court hearing that he considered murder, attempted manslaughter and possession of an illegal firearm proven.

The judge will give his decision March 4.

The shooting incident appears to have originated in a large number of altercations since early 2017 between suspect A. R. (46) and the victim over an argument about the lease of a plot of land. The suspect has built his vehicle-repair business on this piece of land and he also has been residing there in a container since Hurricane Irma struck St. Maarten.

The suspect was once again confronted by the victim and his son during the October 2019 incident. He said he had been verbally abused and he had stepped out of his car carrying a baseball bat. The bat was taken away from him during a brawl and he was hit on his back, his head and in his face.

R. left the Pond Island area afterwards, but returned 35 minutes later with a firearm and shot the two men. One of the victims, an older man, died at the scene, having sustained a fatal gunshot wound. His son was shot in his arm and survived.

R. turned himself and his firearm in at the Philipsburg police station after the shooting. He told the police, and also the Court during his trial, that he could not recollect anything about the shooting, claiming that he had “blacked-out” as he had been overcome by emotions.

The prosecutor had difficulties believing that, as the defendant provided detailed statements about the altercations leading up to the shooting and could also recall what had transpired during the preceding brawl, but his memory failed him where the shooting was concerned.

Attorney-at-law Monique Hofman, who said this was a “very sad” case about an argument that had run out of hand and during which a fellow human-being had lost his life, disagreed with the prosecutor’s opinion about her client’s state of mind.

Hofman said her client had been harassed since 2017 by the victim, who had claimed that the contested plot was “his land” and that the suspect had taken it from him.

“The victim has constantly harassed and threatened my client in recent years. The victim came to the garage to make trouble or stopped client on the road, scolded him and threatened him,” lawyer Hofman said.

She said that because of the history between the two and the years of threats, her client had taken a baseball bat when he stepped out of the car for the umpteenth confrontation with the victim. After he was beaten up her client “was completely upset, he had a blackout, a blockade.” He went home, took a firearm, went back to where the victim was and shot at him, the lawyer said.

“I was completely blocked. I cannot remember what they said,” the suspect had told the police, according to his lawyer. “Normally I get blocked when there is a confrontation and someone is aggressive to me. I do not hear what people say at the time. And when I feel threatened I cannot speak either, I get blocked. When I get problems like this, my mind gets blocked,” the lawyer said in quoting from her client’s statement.

Asked what he had wanted to do with the gun, he told detectives: “I still had in my mind that they beat me up. I cannot remember what the intention was of getting the gun. I was really, really, really, angry at that moment. I was like a crazy man. I was mixed up. Everything was turned upside down.”

Stating that her client was suffering of post-traumatic stress, Hofman said that in her opinion (attempted) murder could not be proven due to lack of legal and convincing evidence. She said it was “obvious” that her client had not acted after “calm deliberations,” and that only attempted manslaughter and firearm possession could be proven.

During Tuesday’s hearing, the victim’s family filed for damages where hospital and funeral cost are concerned. Their lawyer Safira Ibrahim said they will also file a claim for immaterial damage in a civil court of law.