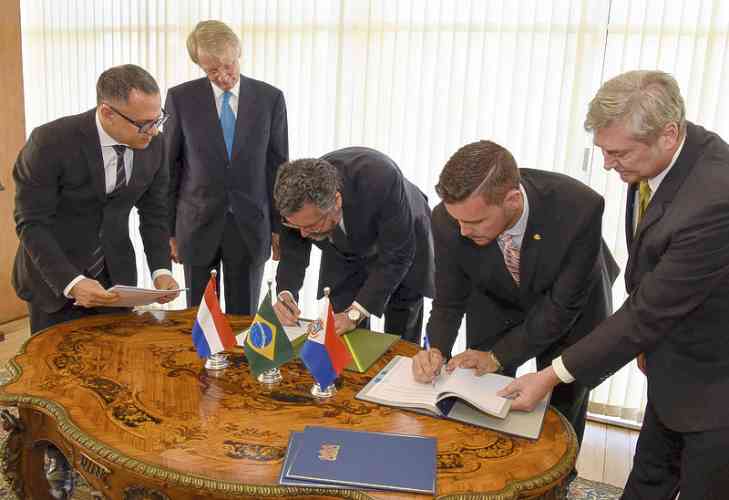 BRAZIL/PHILIPSBURG–Tourism Minister Stuart Johnson signed two bilateral air service agreements (ASAs) between the Kingdom of the Netherlands and the Federative Republic of Brazil in Brazil on Monday. Johnson said the agreements bring great benefit to both St. Maarten and Brazil.

In his address to the officials present, Johnson said that while connections from St. Maarten to Brazil have been available via Panama with Copa Airlines, there have been few flight direct flight options between St. Maarten and Brazil.

The Brazilian market allows for deepening the visitor segment by lengthening the tourism season, allowing for year-round visitors. Brazilians travel during the traditional slow period, when many US travellers tend to vacation in Europe or stay at home.

Based on several visitor expenditure surveys St. Maarten conducted, South Americans proved to be the highest spenders in St. Maarten. Therefore, the re-emphasis on the Brazilian market and the newly-signed agreements create economic opportunities for the island.

“Brazil is an international destination that is in high demand, as is St. Maarten, and it is fitting that the two destinations can today make the bold and aggressive step of entering into this air transport agreement. There can now be scheduled service from Brazil and St. Maarten by carriers to passengers travelling from both countries.

“This agreement also makes it possible for our carriers to enter into code-share, interline and lease agreements to make the travel experience seamless and simplified for visitors from both destinations; for example, the opportunity of seeing the return of GOL Airlines to St. Maarten as a scheduled or charter service. This can once again increase our visitor arrivals from the Brazil market and open to possible new gateways.

“Latin America, including Brazil, has two great demographic attributes that developed countries don’t have, and they are significant population growth and a growing middle class, which means that there are a lot of young families buying a wide range of products and services, including travel and tourism. An estimate of 10 million Brazilians travelled in 2018 and this shows that St. Maarten has an opportunity to gain market share in Brazil,” Johnson said.