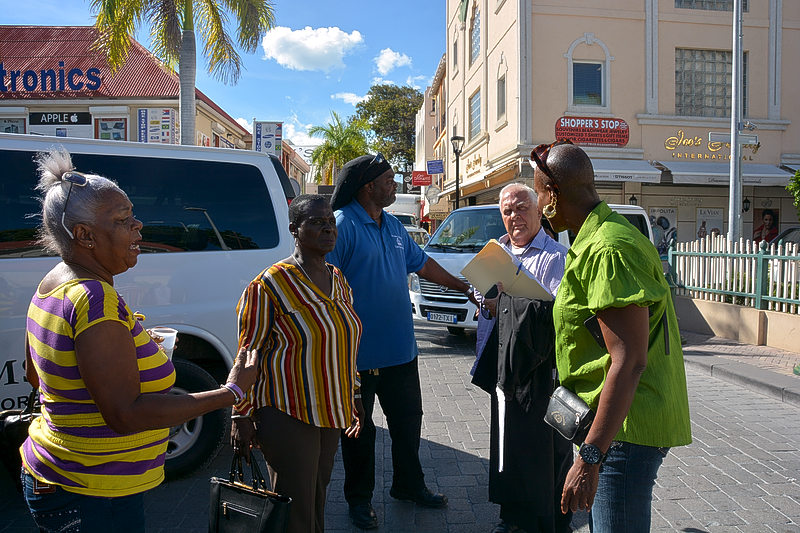 PHILIPSBURG–Two former Carnival Village booth-holders and St. Maarten Carnival Development Foundation (SCDF) squared off at the Courthouse on Friday afternoon. The two long-time booth-holders filed an injunction, as they want to know on what grounds SCDF had decided not to grant them slots at the Village during the 2017 Carnival celebrations. They also filed for damages to the tune of US $3,500.

Booth-holder Avril Berry, who has had a booth during Carnival for the past 27 years, found herself in a predicament after she was informed by SCDF that she would not be allowed to return for the 2017 Carnival season.

Evelyn Dopwell has been operating her booth during April Carnival festivities for the past 20 years, but this time around she may not be able to operate her booth again because of a reshuffle by SCDF.

Lawyer Cor Merx represented both booth-holders in the Court of First Instance on Friday.

Dopwell was informed during a booth-holders’ meeting in November 2016 that SCDF had done some reshuffling, as it had experienced increasing pressure from the community to also grant other persons the opportunity to operate a booth during Carnival. According to the Foundation, there is a waiting list of 200 persons for booths.

The names of the two litigants had come up during board deliberations and the board had decided to give their booths to other persons for the 2017 Carnival season.

It had emerged during the 2016 evaluation that Dopwell and Berry had not opened their booths 24 hours a day as is mandatory, nor had their booths been “creative or contributing to the overall liveliness SCDF is promoting inside the Village walls,” the SCDF representatives informed the Judge. “Also, they were not selling different food items,” Lourens added.

The ladies contested these claims. “I was closed two times during last year’s Carnival: on J’ouvert Morning and one evening as I went home because I was not feeling well,” one of them told the Judge.

“I think it is wrong. I have been operating a booth for 20 years. How can they just take it away?” Dopwell said in an interview with The Daily Herald, which was published Tuesday.

The disgruntled ladies claimed they had never received an explanation about why their applications for booths had been turned down. “They lied,” said Berry in venting her frustration after the hearing.

“There are 10 new booth-holders. Eight former booth-holders did not sign up and my clients were excluded, so no shuffle is needed,” Merx stated in Court.

In representing SCDF, attorneys Emmely de Haan and Femke Jansen recommended that the Judge turn down the litigants’ demands, as the Foundation is not obligated to provide booths.

De Haan said SCDF is a volunteer organisation that has organised the popular Carnival festivities for more than 40 years. It rents out booths at the village on a yearly basis. “As stipulated in the rental agreement, booth-holders do not have a right to rent a booth. The entire board evaluates booth-holders and a breach of rules leads to the loss of the right to operate a booth,” she explained in contesting claims this was a case of what Merx described as “arbitrariness.”

“Also booth-holders of the first hour could lose their booths,” SCDF’s lawyer said in stating that the Foundation might have had new regulations in place since 2016, but no new policy. “It was merely a matter of putting everything neatly in writing.”

SCDF called on the Judge to turn down the litigants’ requests to have a look at the records of SCDF board meetings and other documents. As claimants had not requested any specific documents, SCDF said the request seemed to be a “fishing expedition,” which is against the law. Besides, the contested documents contain confidential information, including the names of other booth-holders and suppliers, SCDF’s legal representatives said.

“It does not concern Shell International here,” said Merx in response. “My clients do not understand why they are being excluded based on an unclear shuffling system.”

The Judge said it would have been better if the booth-holders had been informed by letter or by e-mail why they did not qualify for a booth.

The litigants maintained that they have been in a legal relationship with SCDF for more than 20 years and filed for damages. They make an estimated $6,000 in turnover during Carnival. With reduction of some $2,500 in investments, this leaves a net income of $3,500, not including taxes and fees. They will forfeit this income this year, as their booths have already been rented out to others.

The Court will give its decision on February 24.