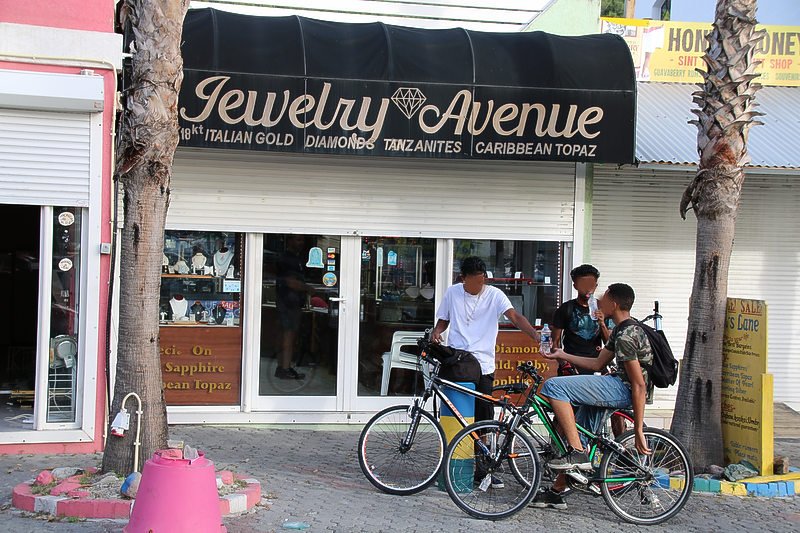 PHILIPSBURG–Two young suspects appeared in the Court of First Instance on Wednesday for their involvement in the violent midday robbery of Jewelry Avenue on November 10, 2016. The retail value of the robbed jewels was estimated at US $350,000.

The 15 and 17-year-old suspects were both found guilty of theft with violence and of illegal firearm possession with ammunition.

The 17 year old was sentenced to 12 months of youth detention, six of which were suspended. He was also ordered payment of $59,719 in a dispossession claim, and will have to follow Aggression Replacement Training (ART) and training in social skills.

The youngest defendant, who was 14 when he committed the crime, was sentenced to nine months of youth detention, three of which were suspended. He will have to pay the same amount and also follow training.

Caught in the act

Prosecutor Martin van Nes, who said the two had been virtually “caught in the act,” called upon the Court to sentence both defendants to 24 months of youth detention, six of which were to be suspended. He also recommended payment of the dispossession claim and training.

The maximum punishment for youth detention is 24 months. However, the maximum sentence for juveniles younger than 16 is 12 months, the Court Registrar pointed out.

Hearing this, the Prosecutor lowered his demand for the youngest defendant to one year, three months of which were to be suspended.

Almost immediately after the robbery, police managed to arrest two of four youngsters who assaulted and injured store staff during the heist. The police had received numerous calls from the public regarding the robbery that took place at the store on Kanaalsteeg.

Prosecutor Maarten Noordzij, who was near the scene of the crime, and who saw four helmed persons driving on scooters with their faces covered, was among those calling 911.

Due to the swift reaction of police patrols, they arrived at the moment the culprits were fleeing the scene on scooters. An intense pursuit followed, whereby the culprits ditched their bikes. Pieces of jewellery were scattered on the street as they tried to escape.

Officers in pursuit managed to apprehend two of the suspects in a house at Over the Bank. The area was cordoned off in search of the other two suspects. Members of the Forensic Team and K-9 unit were called in to assist in the search, which, however, did not yield any results. The other two suspects are still at large to this day.

A home search was carried out and valuables in connection to the case were retrieved, garments that were used by the robbers, as well as helmets and a glove.

The four minors were violent during the robbery and injured two employees by striking them on their heads with the weapons they were carrying. They also smashed the showcase counter.

On Wednesday, the two youngsters remained mum about their involvement in the robbery and called upon their right to remain silent. “I have no comment,” both said in response to questions posed to them by the Judge and Prosecutor.

Questioned by police after their arrest, the two denied they were involved. They claimed they had been at home when a masked man stormed into the house, after which they fled in the bedroom.

A bag with a large number of jewels, two firearms, three bullets, and clothing that were used in the robbery were found during a search. DNA of the suspects was found on some of these clothes.

Both defendants are detained at Miss Lalie Youth Care and Rehabilitation Centre since November 2016. They had caused quite some problems in the institution as well, including involvement in fights, a spokesperson for the Court of Guardianship (COG) informed the Court.

The Prosecutor said there had been several incidents at the Centre. On February 16, Miss Lalie had filed a police report concerning destruction of property and what the Prosecutor described as a “situation of uproar.”

There are currently eight juveniles in the institution, which is struggling with a shortage of staff, the COG spokesperson said.

Both young men had many problems at home and in school. The 17 year old lives in a dwelling without water and electricity. He only saw his father once in his life. The older boys in Over the Bank are like a father figure for him, he told the Judge.

Due to his aggressive behaviour he was put on a “student contract” at St. Maarten Academy PSVE. His co-defendant attended the same school prior to his arrest, but was expelled for possession of a knuckleduster.

Attorney-at-law Remco Stomp pleaded for his clients’ full acquittal. He said that Over the Bank may be a “favela for the less-fortunate, but we’re dealing with two children here without a criminal record.”

The lawyer pointed out that no DNA traces were found on the pistols and said that a lower sentence with community service would be much more “realistic and reasonable.”

The Judge found the case legally and convincingly proven, and held it against the two youngsters that they had not opened up about their “heinous” crimes and had lied to the police.

“This does not spell much good for the future,” the Judge said. “There are two defendants in front of me who do not show any remorse at all. That is very worrisome.” He urged them to return to school and obtain a diploma and make something of their lives.