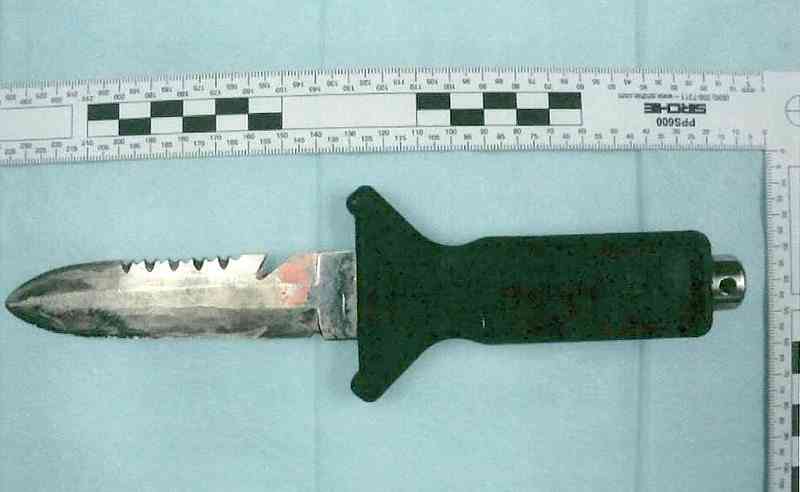 The knife used in the attack. (Prosecutor photo)

MARIGOT–Following the knife attack on an individual at the Agrément roundabout on Monday, a twenty-year-old St. Martiner and a thirty-year-old Jamaican national will appear in the annex (Chambre Détachée) of the Marigot court for a fast-track trial this morning.

The Prosecutor indicated the young St. Martiner has no brushes with the law in his background other than a theft case and the Jamaican is unknown to the justice system. Both had a dispute with the victim over a car rental.

The victim, a 30-year-old man from the Dutch side, managed to escape his attackers, driving himself in a car to the Marigot waterfront, with the knife still lodged in his back, ending up at the L’Express bakery on the corner of Rue de La République and Boulevard de France where passers-by called for an ambulance. It was thought he might have been trying to drive himself to the hospital.

The suspected assailants were released from custody and are facing charges of aggravated violence which can incur a prison sentence of seven years.

Examined in the Dutch-side St. Maarten Medical Centre, the victim needs an Interruption de Travail Total (ITT) of 21 days off work for a perforated lung. Fortunately, no other vital organs were affected. The victim was heard on Tuesday afternoon with the cooperation of the Dutch-side Prosecutor.

In an unrelated matter, the prosecutor’s office appealed on Monday, March 25, against the conviction of Elise January, the Collectivité employee loaned to the Préfecture’s Foreign Service who was prosecuted for corruption and aiding illegal entry and residence and for whom the sentences imposed by the court are less than those requested by the prosecutor.