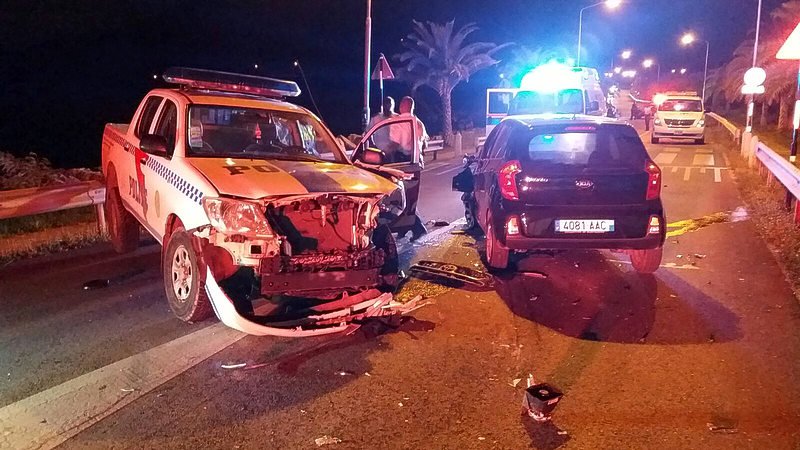 COLE BAY–A police patrol ordered a black KIA Picanto to stop on the Simpson Bay causeway at approximately 12:30am Monday. The driver did not obey the officers and collided head-on with an oncoming police vehicle.

A police patrol had seen the Picanto driving on Airport Boulevard toward Cole Bay and ordered the driver to stop for control because of the vehicle’s heavily tinted windows. The driver refused to halt and increased speed while heading toward the causeway. Another patrol was called in to assist in stopping this vehicle, according to police.
One of the patrols set up a roadblock on the causeway in an attempt to force the car to halt. However, the driver could not stop quickly enough and collided with the police car, causing extensive damage. Neither the driver, passenger nor police officer was injured during the incident.
Because of the strong scent of marijuana emanating from the interior of the Picanto, police conducted a routine search of the car. Two firearms were found and confiscated during the search. The occupants of the vehicle were arrested immediately and taken to the Philipsburg police station where they remain in custody for further investigation.