Home Local News Two of the nine dogs that are said to have been euthanized... 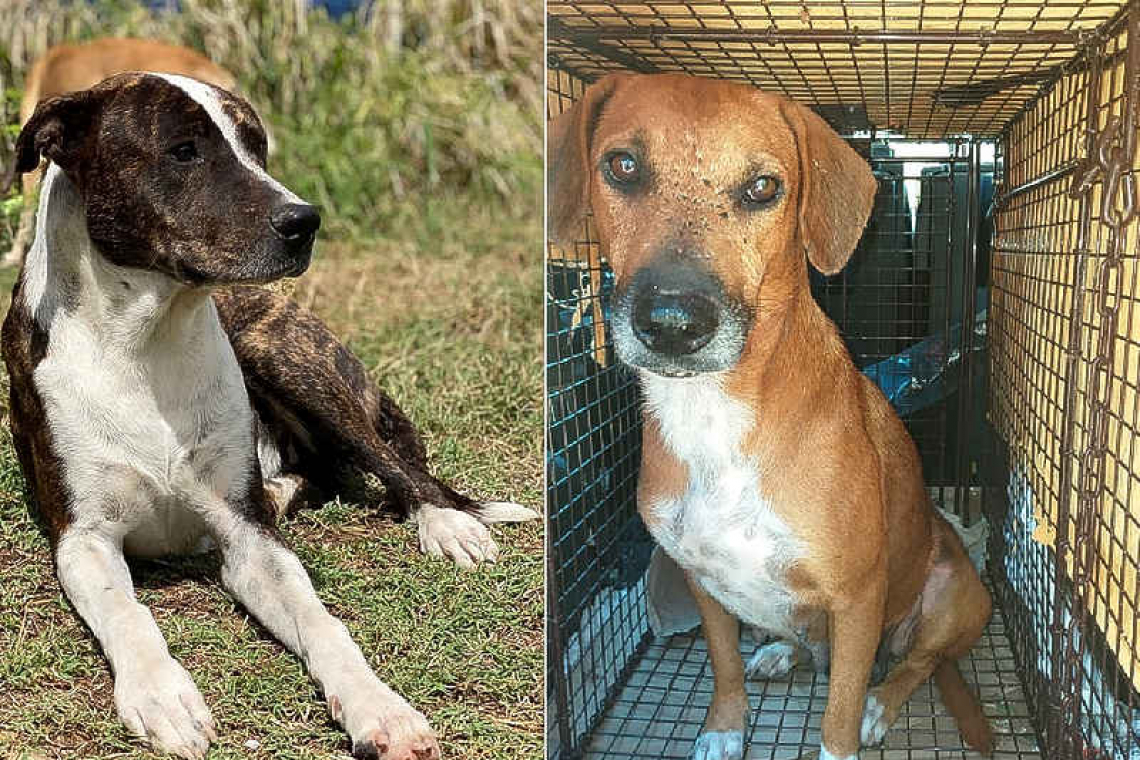 PHILIPSBURG–With help of The Island Vet in Cole Bay, White and Yellow Cross Care Foundation (WYCCF) in St Johns had nine dogs, for the most part spayed and vaccinated, taken off its premises on Monday. The dogs were then reportedly euthanised at the veterinarian’s office.

It is not known who owned the animals. According to WYCCF director Bregje Boetekees this was a pack of wild street dogs. Volunteers who feed dogs in St. Johns say these were friendly animals, with one fearful older female dog who did not allow herself to be approached by people.
WYCCF has done everything to find possible owners of the dogs, said Boetekees. “Since February, we have undertaken multiple efforts, but no one has come forward. For the last months, we’ve also tried to find fosters for these dogs among our staff and through the network of Animal Defenders St. Maarten, which, unfortunately, resulted in only two dogs being adopted.”
Animal Defenders St. Maarten had one dog adopted out to Canada and another one was put in foster care, while the organisation tried to find a solution for other dogs entering WYCCF’s property.
Boetekees said a pack of nine dogs had been settling on the WYCCF location since February. “While they appear friendly to most, they have frequently attacked our clients, staff, and even a young girl who came to visit her grandmother.”
When asked when this incident happened, Boetekees declined to provide details, saying: “A multitude of attacks and incidents [has occurred – Ed.] and the police have also been informed. It has taken months for us to come to this action today, precisely because we have tried so carefully to find all the other solutions.”
Police spokesman Joe Josepha could not be reached Monday to verify whether and when a biting incident had taken place at WYCCF.
In case of aggressive dogs roaming the streets, posing a threat to people, the police would take charge and have these animals put down. It is not allowed for citizens to euthanise animals they do not own.
WYCCF said it had tried to find an alternative solution. “After postponing the deadline twice, in hopes of finding more fosters, we, unfortunately, today, had to make this difficult yet necessary decision to guarantee the safety of our clients, staff, and visitors,” WYCCF stated on Monday in a post on its Facebook page.
“The situation that was created was dire, to say the least. Besides multiple attacks on clients, staff, and visitors, the pack frequently destroyed the clients’ properties, furniture, and medical equipment and caused a nuisance in the neighbourhood at night.”
Animal rescuers predict that other stray dogs from both St. Johns and St. Peters will replace the euthanised pack. Dogs can enter the site from all sides: over the wall at the front, between the bars of the fencing, and at the rear where the fence is damaged, showing large holes, and through a building site there.
Behind WYCCF is a green area where adult dogs and puppies are regularly dumped. This area is adjacent to Blueberry Drive in St. Peters where numerous un-spayed dogs belonging to local residents roam the streets every day.
“St. Maarten is facing a perfect storm of irresponsible pet owners, irresponsible and unregulated backyard breeders, a failure of pet owners to have their animals spayed despite the fact that almost all of the animal welfare groups offer deeply discounted and even free sterilisations,” said a spokesperson for SXM Paws Foundation, whose volunteers are deeply troubled by the nine dogs’ ill fate.
“The fact that pet owners think it’s acceptable to dump their dogs when they no longer want them, and the lack of a government pound or government-funded animal shelter, is one more manifestation of a broad problem that successive governments have failed to address in a meaningful manner by coming up with even the most basic legislation that would establish basic rules of responsible pet ownership, animal rights, and animal welfare in St. Maarten. We should all feel ashamed.”
Animal Defenders St. Maarten has a feeding station at the beginning of the main road in St. Johns. Volunteers check whether dogs that come there are fertile. In 2021, the foundation had 215 dogs and cats spayed and vaccinated.
Animal Defenders St. Maarten is urgently looking for funds to continue the spay and neuter programme.