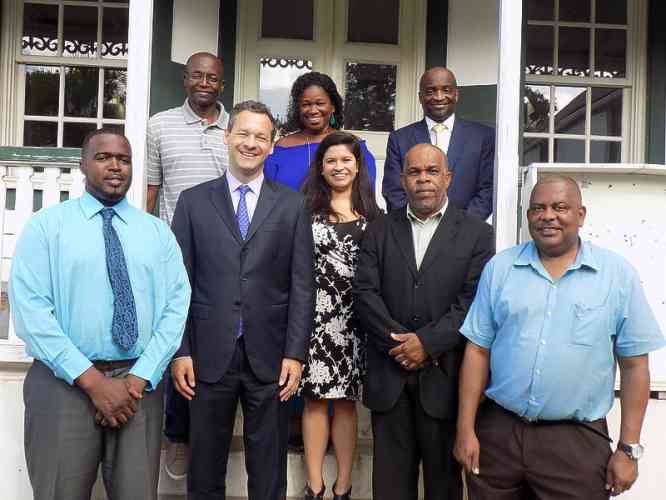 ST. EUSTATIUS–Two lawyers from Perseus Strategies in Washington, D.C, visited St. Eustatius over the weekend for meetings with their client, the Island Government of St. Eustatius. The lawyers were hired to plead Statia’s case to obtain full autonomy within the Kingdom of the Netherlands at the United Nations.

Previously, Genser was a partner in the government affairs practice of DLA Piper LLP and a management consultant with McKinsey and Company.

He believes that based on the Charter of the United Nations and the obligation of the Government of the Netherlands under the Charter Statia will become fully independent within the Kingdom, as the Charter envisions.

“I personally believe that before the end of the year we will have a totally restructured Kingdom [consisting – Ed.] of six fully independent islands, with just three Kingdom ties: defence, nationality and foreign affairs, which is exactly what the Charter calls for,” said legal advisor Denicio Brison. He said Genser will lead these discussions with the Dutch Government to this effect.

Genser had quite an impressive resumé. He has taught semester-long seminars about the UN Security Council at Georgetown University Law Center and the University of Michigan and University of Pennsylvania law schools.

He was an Associate of the Carr Center for Human Rights Policy at Harvard University from 2014-2016, a Visiting Fellow with the National Endowment for Democracy from 2006-2007 and was previously named by the National Law Journal as one of “40 Under 40: Washington’s Rising Stars.”

Genser is the recipient of the American Bar Association’s International Human Rights Award, Liberty in North Korea’s Freedom Fighter Award and the Charles Bronfman Prize. He is also a member of the Council on Foreign Relations and a Fellow of the Royal Society of the Arts.